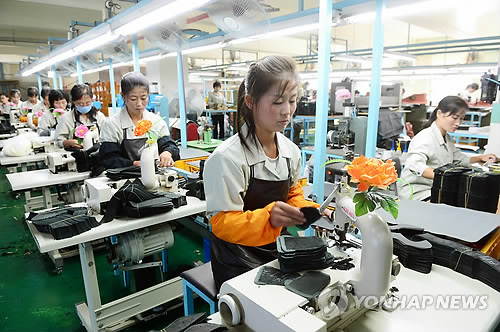 The value of inter-Korean trade reached US$2.343 billion last year, up 106.2 percent from a year earlier from a rise in exchanges at the Kaesong Industrial Complex. (image: Yonhap)

SEOUL, April 30 (Korea Bizwire) — South Korea said Thursday that the volume of inter-Korean trade hit a record high in 2014 on growth in exchanges at a joint industrial complex in the North despite Seoul’s punitive sanctions on Pyongyang.

The value of inter-Korean trade reached US$2.343 billion last year, up 106.2 percent from a year earlier, according to a 2015 white paper on unification issued by the Ministry of Unification.

The ministry said that an increase in inter-Korean trade mainly resulted from a rise in exchanges at the Kaesong Industrial Complex even as Seoul has imposed punitive sanctions that bans economic exchanges with North Korea since 2010 following the North’s deadly sinking of a South Korean warship.

The joint factory park, which opened in 2004, is the last remaining symbol of inter-Korean reconciliation. It has served as a major revenue source for the cash-strapped communist North, while South Korea has utilized cheap but skilled North Korean laborers.

A total of 124 South Korean small- and medium-sized enterprises have hired about 53,000 North Korean workers at the industrial complex in the border city of the same name.

The ministry said that the value of inter-Korean trade made at the complex reached $2.33 billion in 2014, up 106.5 percent from the previous year. The volume accounted for 99.8 percent of the total inter-Korean trade.

The two Koreas have been embroiled in a wage dispute as North Korea has unilaterally decided to hike the minimum monthly wage by 5.18 percent to US$74 starting in March.

Seoul has not accepted the North’s unilateral move, saying that Pyongyang violated a 2004 agreement that calls for the two sides to set the wages together. The wage cap has been set at 5 percent per year. Seoul warned that violators would be penalized.

Meanwhile, the ministry said that South Korea plans to push to consult with North Korea to launch the creation of a peace park in the Demilitarized Zone (DMZ) bisecting the two Koreas this year. The government also said that it plans to kick off its move to create the park.

The plan to set up the ecological park in the DMZ was first drawn up in 2013 by South Korean President Park Geun-hye in a bid to facilitate peace on the Korean Peninsula.

The two Koreas are the only remaining divided countries in the world after fighting each other during the 1950-53 Korean War.