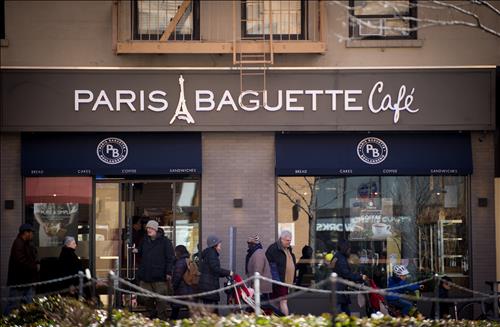 Customers visit a Paris Baguette branch in the Upper West Side of Manhattan, New York, on April 1, 2015. (image: SPC Group)

The 353.1-square-meter branch that functions as a cafe and bakery, located in the posh Upper West Side, is the latest addition to its branches in the New York borough, according to SPC Group, which operates the bakery chain.

“We created a bigger and convenient venue to cater to customers in the affluent residential neighborhood. Paris Baguette is quickly gaining popularity as we open stores in key Manhattan areas,” said a company official at the group’s U.S. subsidiary.

With the latest opening, SPC Group now operates 39 branches in the U.S., with most of them concentrated in California, where the Korean-American population forms one of the biggest ethnic communities.

The U.S. expansion is part of the company’s attempts to grow globally as the local food and beverage market is feared to shrink amid rapid aging.

Earlier this year, the company announced plans to raise its annual sales to 10 trillion won (US$9 billion) by 2020 by accelerating its expansion in China and the United States.