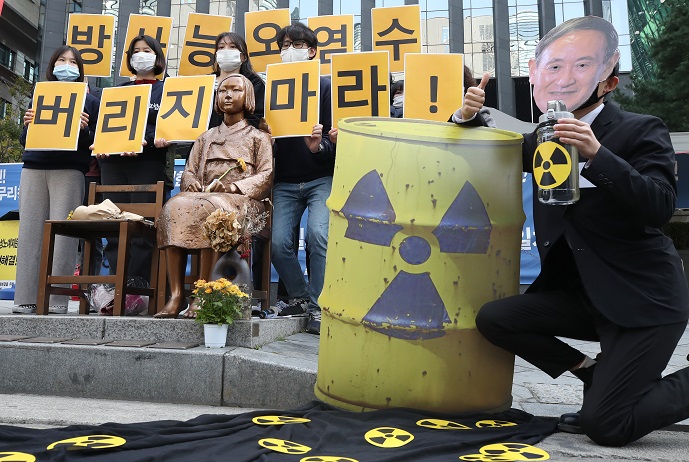 A protestor wearing a mask depicting Japanese Prime Minister Yoshihide Suga simulates the disposal of radioactive water into the ocean during a rally in Seoul on Oct. 19, 2020, to oppose the release of water containing radioactive materials stored at the Fukushima nuclear power plant in Japan. (Yonhap)

SEOUL, Oct. 21 (Korea Bizwire) — As the Japanese government is set to confirm its decision about releasing contaminated water from the damaged Fukushima nuclear plant into the sea on Oct. 27, interest is growing over what impact radioactive materials could have on the human body.

Despite Japan’s claim that it has purified the contaminated water by using advanced liquid processing system (ALPS), concerns are growing since it failed to remove the radioactive material tritium.

Tritium is a radioactive isotope that emits radiation. Given that tritium has a half-life of about 12.3 years, it could take several decades for tritium to fully decay naturally.

The problem is that it’s extremely difficult to separate tritium from water. The isotope has the same mechanical properties as normal hydrogen or heavy hydrogen.

If it remains mixed in water after being combined with oxygen, it’s virtually impossible to separate it from water physically or chemically.

Worse, Japan failed to remove tritium even with the ALPS since it has no effective tritium removing technology.

The tritium density of the contaminated water within the Fukushima nuclear plant is estimated at 580,000 becquerel (Bq) per liter, far exceeding Japan’s discharge threshold of 60,000 Bq.

Tritium is a radioactive material that already exists in nature. However, precautions are needed to prevent the internal organs of human bodies from being exposed to it.

The long-term consumption of marine life polluted with the contaminated water could lead to the accumulation of radioactive material within the human body.

If tritium replaces normal hydrogen inside the body, it emits beta rays, with tritium being transformed into helium.

If this happens to DNA, it could result in health risks by transforming DNA, killing cells or degrading reproductive functions.