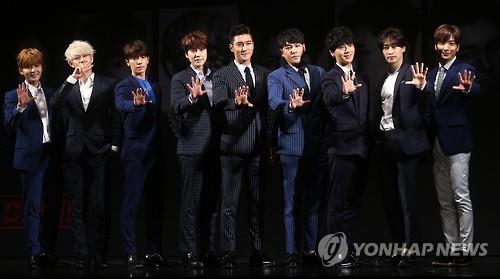 SEOUL, July 16 (Korea Bizwire) — Many K-pop stars come and go, with only a handful staying on the scene in the long run.

Super Junior is among the rare few who debuted a decade ago and still has a large following at home and in other Asian countries.

The band released “Devil,” a special album marking its 10th anniversary, on Thursday.

The best-selling K-pop artist for three years in a row, Super Junior has earned 16 music awards, including three grand awards, from the Golden Disk Awards.

It set a record of attracting a total of 1.8 million fans to its “Super Show” concerts that have been held in major cities around the world since 2008.

When there are no team activities, the group’s 13 members have devoted themselves to individual activities as emcees in television programs, actors and theater musical actors.

On Wednesday, nine of them sat down together for a news conference to mark the release of the new album in Seoul.

Questioned about the secret behind the group’s longevity, Lee Teuk, the team leader, cited the intimate relationship among the members.

“We talk and squabble all the time with one another, so I think that has been the key to our longevity,” he said.

But it took 10 years for the members to recognize they are all different.

“I think we are able to be here because we recognize our differences. Now I can’t do anything without these guys.”

Including “Devil,” the title song with a trendy melody, the album has 10 songs of different genres, such as “Alright” and “Don’t Wake Me Up.”

The album is the result of collaboration with leading singer-songwriters in the K-pop scene — Lee Seung-hwan, Kim Yoon-a, Rose Motel and Epitone Project.

Members laughed when asked if they were feeling an extra burden as their album is being released during an intense chart competition among major K-pop girl groups.

“I’ve been trying hard to make myself beautiful because we have to compete with girl groups,” Heechul said with a chuckle. “I dyed my hair gold and used eyeliner. I’m also on a diet.”

Lee said he is happy now that he gets many opportunities to meet girl groups, unlike before when he felt a lot of anxiety.

Super Junior expressed hope that it wants to remain active in the K-pop scene as long as it can.

“After 10 years, I’m now thankful for my teammates and must apologize to them as well. I like to be with them and will continue to do so in the future,” Donghae said.