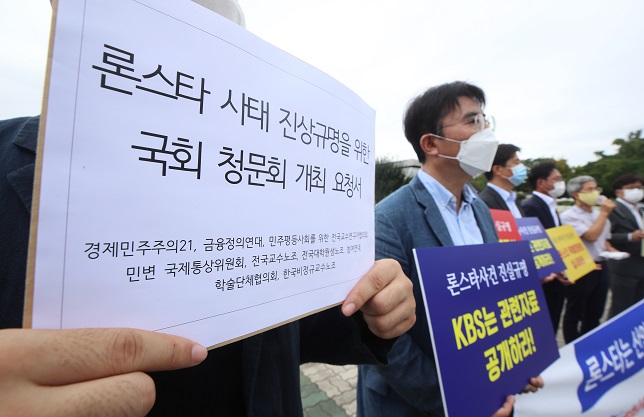 Civic activists call for a parliamentary hearing on the investor-state dispute settlement (ISDS) between Lone Star and the South Korean government in a press conference held in Seoul in September 2020. (Yonhap)

SEOUL, June 29 (Korea Bizwire) — An international tribunal declared an end to all proceedings in a multi-billion dollar suit the U.S. private equity firm Lone Star filed against South Korea’s government 10 years ago over disputes surrounding its asset sell-off, according to the justice ministry Wednesday.

The International Center for Settlement of Investment Disputes declared the “termination of the proceeding” on the investor-state dispute settlement (ISDS) between Lone Star and South Korea, paving the way for a verdict as soon as within 120 days.

Lone Star filed the suit in November 2012 to seek US$4.68 billion in compensation from South Korea’s government, claiming that its 2007 plan to sell a controlling stake in now-defunct Korea Exchange Bank to HSBC fell through because Seoul’s financial regulatory authorities unreasonably delayed approval of the deal.

Lone Star claimed it ended up selling off the KEB stake for a margin much smaller than what it could have gained from the botched deal. Lone Star eventually sold the stake to Hana Financial Group for some 3.9 trillion won (US$3 billion) in 2012.

South Korea maintains that it treated Lone Star equally and fairly, as in the case of domestic entities, in accordance with international laws and regulations.

Four rounds of hearings on the case were held between 2015 and 2016, along with a question-and-answer session in October 2020.

The justice ministry said the government plans to review what steps it will take after the tribunal delivers its decisions.

“Within the scope of relevant laws, the government will transparently release necessary information as much as possible,” a justice ministry official said.