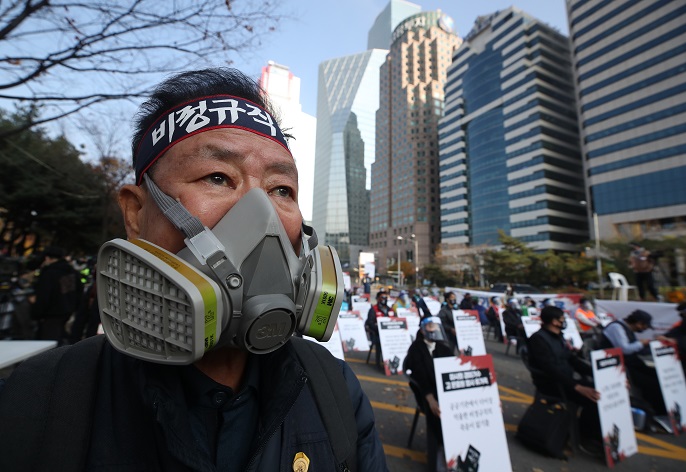 A man wearing a gas mask participates in a rally organized by the Korean Confederation of Trade Unions in Yeouido, southern Seoul, on Nov. 14, 2020. (Yonhap)

SEOUL, Nov. 14 (Korea Bizwire) — Labor activists pushed ahead with street rallies in Seoul and other major cities Saturday despite concerns over spikes in coronavirus infections.

The Korean Confederation of Trade Unions (KCTU), a major umbrella labor organization, and about 20 affiliated union groups took to streets across the country to stage scores of small-scale demonstrations in commemoration of the 50th year since Chun Tae-il, pioneer of the nation’s labor activism, self-immolated on Nov. 13, 1970, for the cause of workers’ rights.

In Seoul alone, the KCTU and progressive groups were allowed to hold 31 rallies in 61 locations. Conservative groups also reported plans for 47 political demonstrations in 85 locations in the capital, according to the Seoul Metropolitan Police Agency.

The rallies came as the nation’s new coronavirus cases exceeded 200 for the first time in 73 days amid lingering cluster infections across the nation.

The Korea Disease Control and Prevention Agency reported 205 more COVID-19 cases, including 166 local infections, raising the total caseload to 28,338. The number of new infections stayed in triple digits for the seventh consecutive day.

The KCTU said participants strictly complied with coronavirus rules, including wearing masks and keeping safe distances, during the demonstrations. The number of participants in each gathering was kept below 100 under social distancing rules.

“We are checking body temperatures of the participants and making sure that the number does not exceed 99,” an official from the KCTU said.

From Seoul to central Daejeon to the southern island of Jeju, labor protests proceeded mostly peacefully, with participants sitting in, marching and chanting slogans on roads and squares.

Police parked a number of buses in front of the National Assembly in Yeouido, southern Seoul, to protect against protestors participating in a KCTU rally near the premises.

But police refrained from establishing barricades in central Seoul as protesters voluntarily restricted the number of participants, unlike early October when parked buses walled off Gwanghwamun Square and nearby areas.

“We have deployed around 7,000 officers across the city to prepare for unexpected incidents,” a police official in Seoul said. 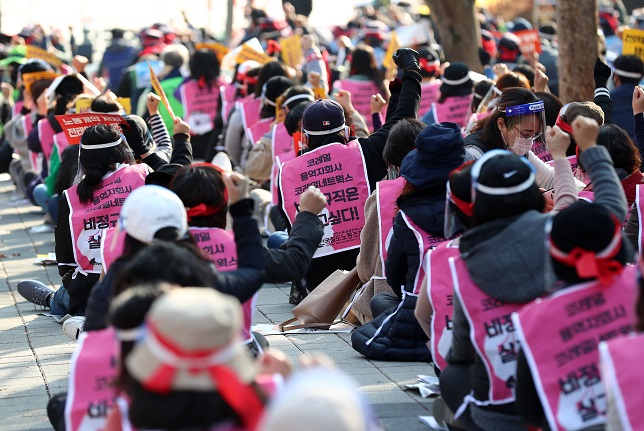 Members of the Korean Confederation of Trade Unions chant slogans during a rally in Daejeon, 160 kilometers south of Seoul, on Nov. 14, 2020. (Yonhap)

Earlier in the day, President Moon Jae-in made a last-minute appeal for organizers to cancel the rallies.

“The rallies should be reconsidered,” Moon said in a Facebook post. “Freedom of assembly matters but the safety of the people is more important,” he added.

He warned of stern legal actions against any illegal acts and breaches of social distancing rules during the rallies.

Prime Minister Chung Sye-kyun said in a Facebook post that the government will take measures to ensure participants comply with COVID-19 guidelines and will firmly respond to violators and thoroughly hold them accountable.

“We will do our best to prevent today’s rallies from becoming a trigger for the spread of COVID-19,” Chung said.

Seoul police also warned they will promptly crack down on the rallies should the number of participants in each gathering increase sharply.

“We will advise participants to follow health guidelines while limiting the number of participants,” a police official said. “If the number exceeds the limit, we will take stern actions, including dispersing them.”

South Korea, despite being considered to be one of most successful countries in terms of managing the virus pandemic, has suffered a slew of cluster infections since identifying its first patient in late January.

At the early stage of the pandemic, the country reported a whopping 5,200 cases of COVID-19 traced to a minor church sect from the southeastern city of Daegu. Later in the year, some 280 cases were reported from a nightlife district in the capital city.

More recently, 650 cases were traced to an anti-government rally held in the central Seoul on Aug. 15. A conservative church in northern Seoul, whose members also participated in the demonstration, added another 1,173 cases.