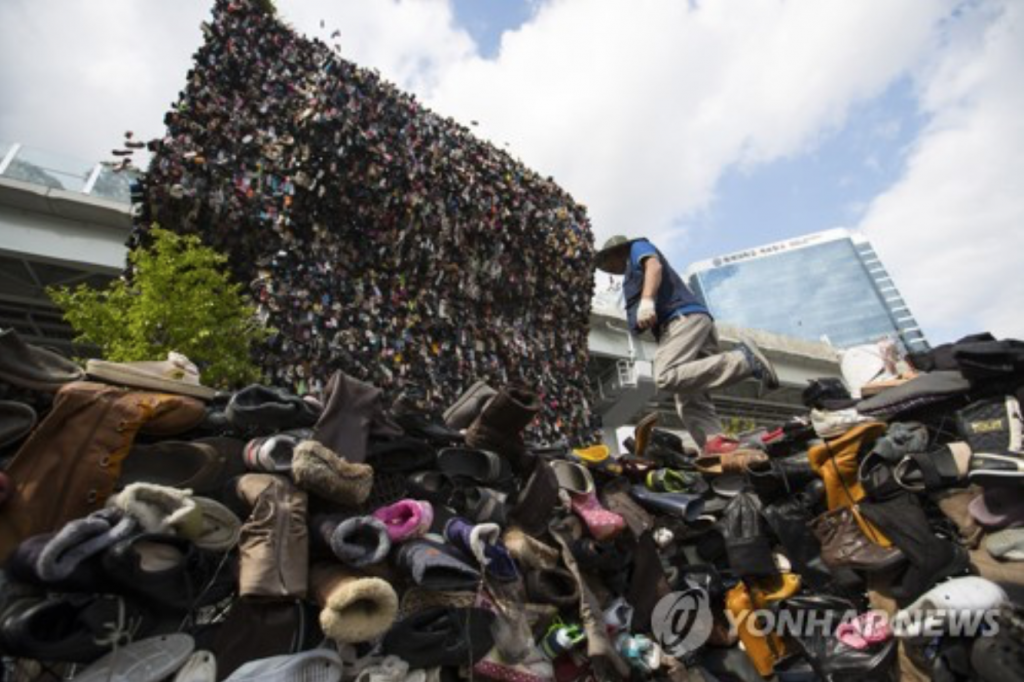 Dubbed the Shoes Tree, some 30,000 pairs of (mostly) old and donated shoes are erratically piled up on top of each other. (image: Yonhap)

SEOUL, May 17 (Korea Bizwire) – Citizens have been taken aback by the horrific sight of a 17-meter-high, 100-meter-long array of worn out shoes that has been undergoing construction in front of Seoul Station over the past couple of days.

As it turns out, the three-ton “installation art” was being arranged to celebrate the completion of Seoullo 7017 – Seoul Metropolitan Government’s ambitious urban renewal project that transformed a 40-year-old overpass into an eco-friendly pedestrian walkway.

The official opening of Seoullo 7017 is scheduled for May 20. And in the city’s defense, the artwork has yet to be completed, with more decoration to come and officials confident that its upcycling endeavor well-represents the core motif of the new overpass. 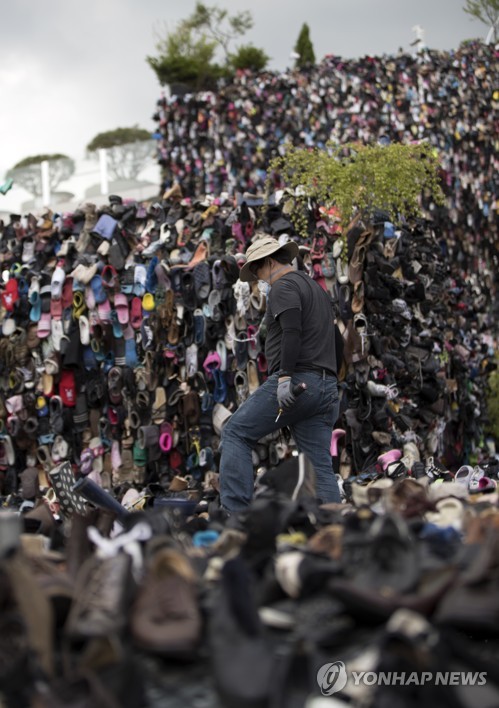 Dubbed the Shoes Tree, some 30,000 pairs of (mostly) old and donated shoes are erratically piled up on top of each other. In between the jumble are car engines and exhaust pipes that apparently “add vividness,” while the shoes will later serve as flower pots, the city said. The final work will be on display until May 28.

“The road that was once occupied with vehicles is now a pedestrian path,” said garden designer Hwang Ji-hae, who conceived of the idea, in an interview with SBS News. “Through the shoes, people can think about the values lost in urban neighborhoods.”

Regardless of the work’s original intent, the majority of the public remains skeptical, namely for its utter lack of aesthetics. Some were even terrified by the eerie sight, comparing it to an Auschwitz Museum exhibit displaying the shoes of WWII victims. 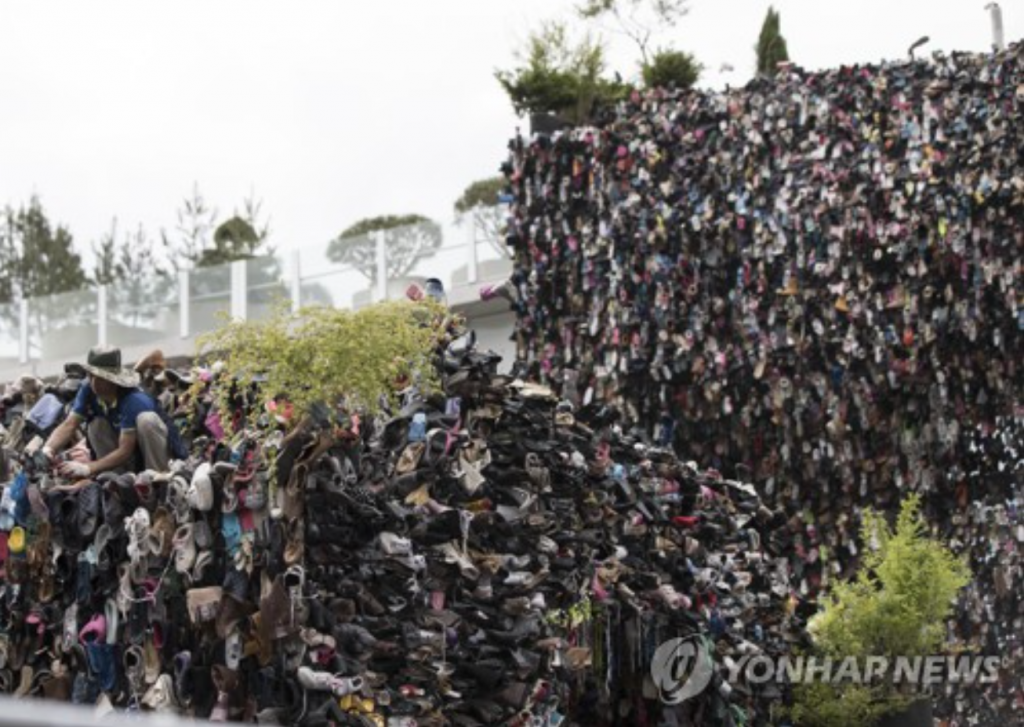 “I don’t know much about art, but it doesn’t look like artwork to me,” said 27-year-old office worker Kim Ju-hee from Ilsan, who came across the installation on Tuesday. “It kind of feels like an incineration plant.”

This is not the first time for the Seoul government to face public backlash for its art initiatives, often criticized for wasting city funds.

In 2015, the government built a monster sculpture from South Korea’s sci-fi hit The Host at the Yeouido Han River Park, which was rapidly denounced as a public monstrosity; while last year, it erected a 5.3-meter-high Gangnam Style statue, showing two fists overlapped like the “horse-riding” dance move from the song, which was condemned by some as outdated. 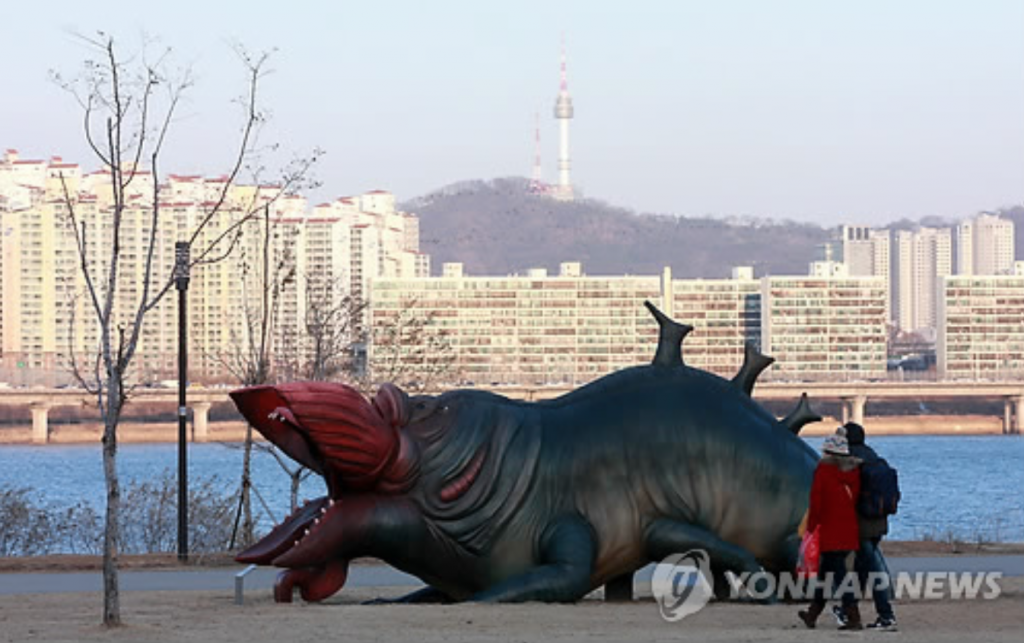 In 2015, the government built a monster sculpture from South Korea’s sci-fi hit The Host at the Yeouido Han River Park, which was rapidly denounced as a public monstrosity. (image: Yonhap)