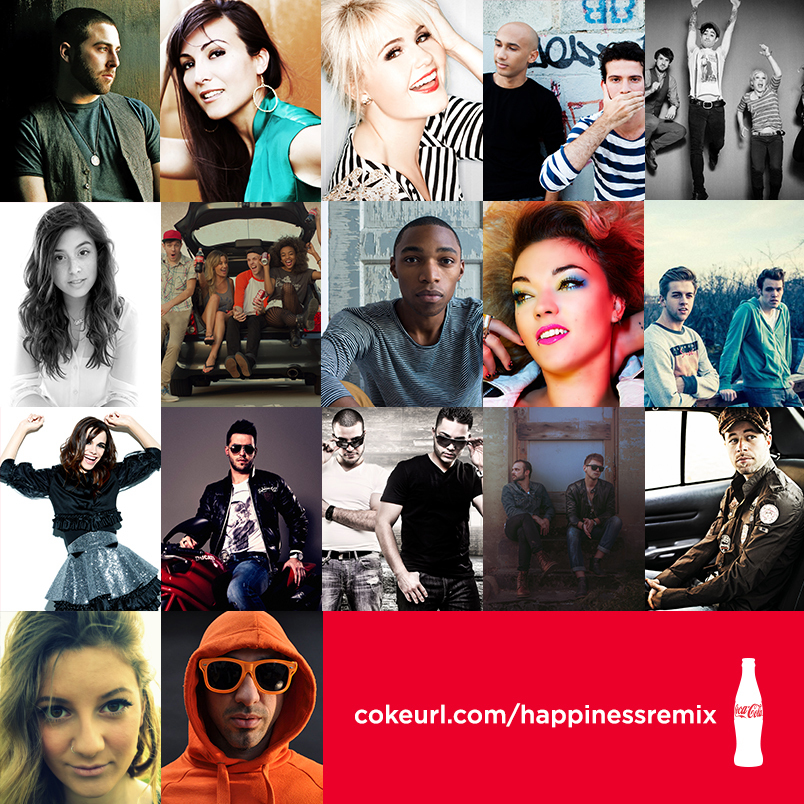 ATLANTA, Mar 20, 2014 (Korea Bizwire) — As the world recognizes International Day of Happiness, Coca-Cola is  joining the celebration by releasing Happiness Remix, a brand new  track designed to bring out the happy in all who hear it. The track can  be downloaded for free on Coca-Cola  Journey.

Produced by acclaimed pop music ‘super producers’ Rock Mafia, Happiness  Remix is an infectiously upbeat pop song, which fuses beats,  melodies and rhythms from 17 songs created by independent artists from  around the globe.

To find the songs for Happiness Remix, Coca-Cola worked with  music licensing agency Music Dealers to invite emerging artists  from around the globe to create a track inspired by a place of happiness.

Tim James and Antonina Armato, the talented duo behind Rock Mafia have  worked with global superstars Miley Cyrus, Selena Gomez, Aloe Blacc and  Mariah Carey. Combining the science of making people happy with the art  of creating a hit song, Rock Mafia consulted respected music  psychologist Professor Adrian North – author of the report ‘How to  Produce Happy Music’ – on the creation of the track.

“I found the science fascinating! For me as a musician, I approach music  from the heart,” said Tim James. “I believe in channeling inspiration  but we were blown away with how, psycho-acoustically, music affects  people, and which note combinations have this profound effect. It was  great to see how aligned we were on what great music is and what moves  people.”

Armato continues, “I don’t think anyone has ever done something like  this before. It definitely put a smile on everyone’s face.”

Professor North, a respected music psychologist based at Curtin  University in Australia, described some of the theory behind making  happy music. “Universally, music is one of the most powerful stimulators  of happiness. Different things make people happy, but there are ways,  through music, to help deliberately evoke happiness through the  arrangement of beats and melodies.”

“The Coca-Cola brand mission is to refresh the world and inspire moments  of happiness,” said Joe Belliotti, Head of Global Music Marketing, The  Coca-Cola Company. “We’re celebrating International Day of Happiness by  releasing a song that we hope will literally make people feel happy.  It’s up to music fans to decide, but we hope everyone enjoys listening  to Happiness Remix.”

The video  for Happiness Remix is a montage of happy moments featuring the  artists as well as footage from Coca-Cola ads from around the world. Happiness  Remix is the latest addition to the Coca-Cola Open Happiness  campaign which has launched in over 200 markets worldwide.

To learn more about the making of Happiness Remix and to get to  know the artists involved, visit Coca-Cola  Journey.

International Day of Happiness was established by the United Nations to  further the idea that happiness is a fundamental human right and  everyone deserves the chance at a happy, healthy life.

The full list of Music Dealers artists included in the track is as  follows:

Professor Adrian North’s research on the psychology of music is  available at: http://healthsciences.curtin.edu.au/teaching/psych_people.cfm/Adrian.North

About The Coca-Cola Company

The Coca-Cola Company (KO) is the world’s largest beverage  company, refreshing consumers with more than 500 sparkling and still  brands. Led by Coca-Cola, one of the world’s most valuable and  recognizable brands, our Company’s portfolio features 17 billion-dollar  brands including Diet Coke, Fanta, Sprite, Coca-Cola Zero, vitaminwater,  Powerade, Minute Maid, Simply, Georgia and Del Valle. Globally, we are  the No. 1 provider of sparkling beverages, ready-to-drink coffees, and  juices and juice drinks. Through the world’s largest beverage  distribution system, consumers in more than 200 countries enjoy our  beverages at a rate of 1.9 billion servings a day. With an enduring  commitment to building sustainable communities, our Company is focused  on initiatives that reduce our environmental footprint, support active,  healthy living, create a safe, inclusive work environment for our  associates, and enhance the economic development of the communities  where we operate. Together with our bottling partners, we rank among the  world’s top 10 private employers with more than 700,000 system  associates. For more information, visit Coca-Cola Journey at www.coca-colacompany.com,  follow us on Twitter at twitter.com/CocaColaCo,  visit our blog, Coca-Cola Unbottled, at www.coca-colablog.com  or find us on LinkedIn at www.linkedin.com/company/the-coca-cola-company.

Rock Mafia is best known for their breakout successes in writing,  producing and launching huge artist careers which resulted in over 50  million albums sold, eleven multi-platinum # 1 hits, and seventeen top 5  records. Rock Mafia has worked with artists like Wyclef Jean, Aloe  Blacc, Miley Cyrus, Green Day, Timbaland, and many others. Currently,  Rock Mafia scored another number one success with their production of   ‘Stars Dance’ for Selena Gomez, which went straight to #1 on the US  Billboard charts, as well as # 1 on the world wide global album charts  and is Gomez’s follow up to the Rock Mafia production “Love You Like A  Love Song,” which also has achieved numerous platinum awards all over  the world, and was certified 4X platinum in the US alone.

Music Dealers™ is a global music technology company that provides  clients in the advertising, television, film and gaming industries with  the highest quality emerging music to enhance their work. Powered by a  global artist community of the world’s top breakout artists, Music  Dealers crowd-sources existing and original music, procures brand  partnerships and offers the largest emerging artist music-licensing  database in the world. In 2011, Music Dealers cemented a groundbreaking  partnership with The Coca-Cola Company, which secured Music Dealers’   position as the organization’s exclusive global music partner and earned  Coca-Cola a minority stake in the company. Music Dealers is based in  Chicago, with offices in Los Angeles, New York, Atlanta, London and  Mexico City.