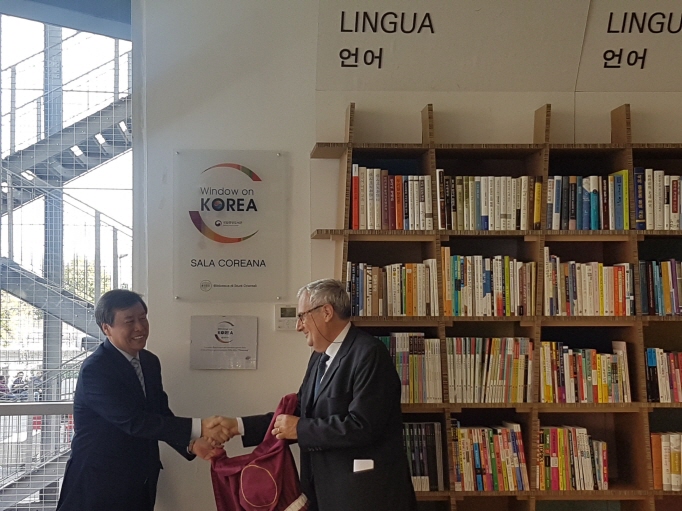 South Korea’s Minister of Culture, Sports and Tourism Do Jong-whan (L) shakes hands with an official of the Sapienza University of Rome after a ceremony to unveil the Korean archive at the university on Oct. 16, 2018. (image: Yonhap)

ROME, Oct. 17 (Korea Bizwire) — A Korean archive has opened at the library of the Asian Studies Department of Sapienza University of Rome, a prestigious university in the Italian capital.

The opening ceremony for the archive, “Window on Korea,” was held at the library on Tuesday, with about 300 professors and students attending.

The Korean archive was created under an agreement between the university library and the National Library of Korea. It is equipped with some 3,000 books about Korean language, literature and history, as well as Korean films, dramas and pop music in both online and DVD formats.

The National Library of Korea has been supporting the establishment of Korean archives in 27 cities of 25 countries, including the United States, China and Germany. It is the first time that a Korean archive has opened in Italy.

The library expects the opening of the first Korean archive in Italy to help support Korean studies in the European country, not only at the Sapienza University of Rome.

It is the only university in Italy that runs a full course of Korean studies ranging from undergraduate to doctorate levels. The number of students enrolled in the department has been on a steady rise thanks to the global popularity of K-pop and Korean TV dramas. It now has about 350 students enrolled.

“With President Moon Jae-in’s official visit to Italy as an occasion, the two countries have discussed ways to enhance their cultural exchanges. The opening of the first Korean archive in Italy is part of such efforts,” Do Jong-whan, South Korea’s Ministry of Culture, Sports and Tourism, said during the ceremony.

“We hope this facility will serve as the foundation for Korean Studies and as a base for spreading Korean culture,” he added.