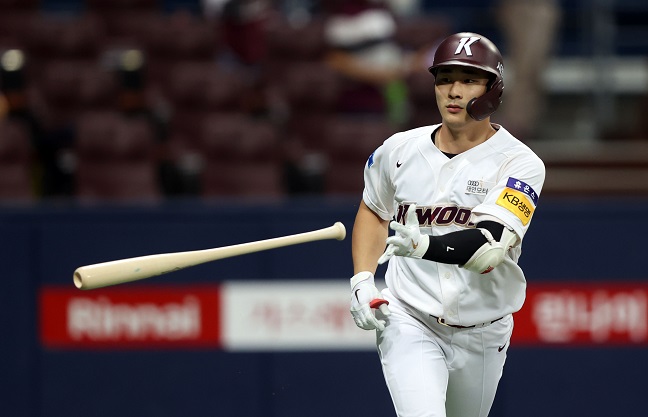 In this file photo from Aug. 5, 2020, Kim Ha-seong of the Kiwoom Heroes tosses his bat after hitting a three-run home run against the KT Wiz in the bottom of the third inning of a Korea Baseball Organization regular season game at Gocheok Sky Dome in Seoul. (Yonhap)

The Padres officially announced their four-year deal with Kim on Thursday (local time), two days after it was reported that the two sides had reached an agreement. The deal was pending a physical.

Kim’s Seoul-based agency, A-Spec Corp., said Kim will earn a guaranteed US$28 million over four years and can make up to $4 million more in performance-based incentives.

The agency said there’s a mutual option for a fifth season, and if it’s picked up, it will take the total value of the deal to up to $39 million.

Kim, 25, spent the past seven seasons with the Kiwoom Heroes of the Korea Baseball Organization (KBO). He was posted for Major League Baseball (MLB) clubs on Dec. 2, and the deadline for him to land a deal was 5 p.m. Eastern Time on Friday.

If Kim hadn’t been able to sign, he would’ve had to return to the Heroes and wait until November 2021 to be posted again.

Kim is the first South Korean position player to jump from the KBO to MLB via posting since his Kiwoom teammate Park Byung-ho, who signed with the Minnesota Twins in December 2015.

Kim’s deal is also the largest earned by a KBO position player moving to MLB through the posting process. 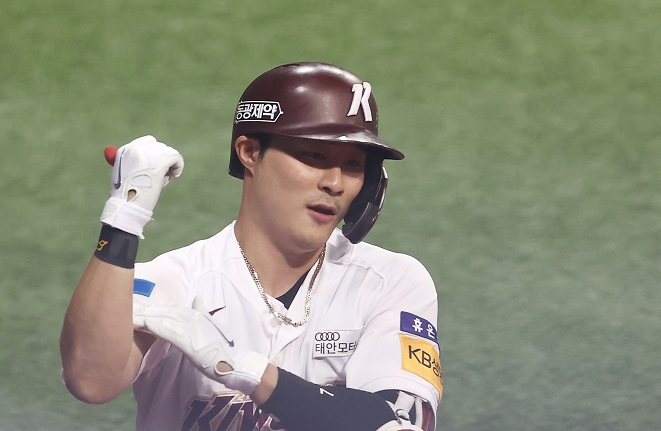 In this file photo from Oct. 7, 2020, Kim Ha-seong of the Kiwoom Heroes celebrates his solo home run against the NC Dinos during the bottom of the fifth inning of a Korea Baseball Organization regular season game at Gocheok Sky Dome in Seoul. (Yonhap)

The athletic fielder has mostly been a shortstop, but he also played some third base this year, after the Heroes acquired former Chicago Cubs All-Star Addison Russell in the summer.

The Padres are set at both shortstop and third base, with future MVP material Fernando Tatis Jr. and MVP-caliber All-Star Manny Machado.

Kim could slide over to second base as a platoon partner with the incumbent Jake Cronenworth, or either of the two could move to the outfield.

As per the posting agreement between the KBO and MLB, the Heroes will receive a fee from the Padres based on the guaranteed amount of Kim’s deal.