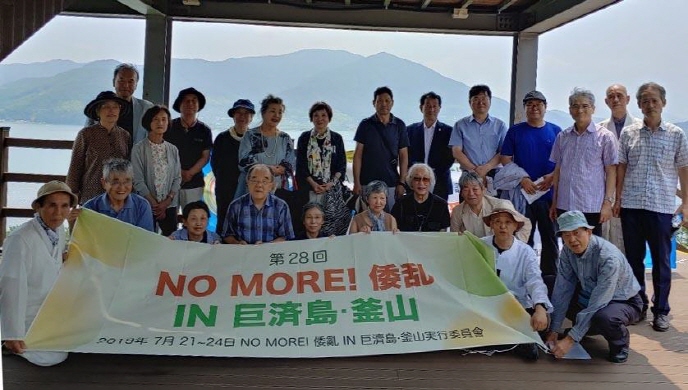 Members of a Japanese civic group, known as the Executive Committee for No More Japanese Invasion, pose for a photo on Geoje Island off South Korea’s south coast. (Yonhap)

BUSAN, Jul. 23 (Korea Bizwire) — A Japanese civic group has held an event in South Korea for the 20th consecutive year as part of efforts to express remorse for Japan’s invasion of the Korean Peninsula, the group operating in Japan’s southwestern region of Kyushu said Tuesday.

The group, known as the Executive Committee for No More Japanese Invasion, visited the South Korean coastal city of Busan to pay tribute to a statue of a girl symbolizing the victims of Japan’s wartime sexual slavery in front of the Japanese Consulate on Monday after arriving in South Korea on a two-day trip.

According to a member of the committee, Yoshiaki Kawamoto, the leader of the group, and an expert on modern Japanese history, knelt down in front of the statue as a gesture of apology to the victims.

The committee’s visit came amid a growing diplomatic row between Seoul and Tokyo over wartime forced labor and economic retaliation.

The civic group, which has Christian pastors, teachers, students and human rights activists as members, believes the strained relations between the two neighboring countries arise from Japan’s inaccurate view of shared history with Korea and called for the resolution of the row at an early date.

The members also paid a visit to the Chilcheolyang Maritime War Park on Geoje Island off South Korea’s south coast, one of the fierce battlefields in the 16th century invasion of the Korean peninsula by warlord Toyotomi Hideyoshi.

Established in 1992 in honor of late pastor Choi Chang-hwa, who devoted himself to improving human rights in Japan, the civic group concurs with Choi’s wishes for Japan’s road to peace in the Northeast Asia.

During his time, Choi is said to have stressed that if Japan had reflected on its invasions of Korea following the Hideyoshi invasion, there would have been no chapters of aggression in modern Japanese history.

The group made headlines in 1992 by holding its first meeting at the site of Nagoya Castle in the Japanese southwestern prefecture of Saga, a starting point for Hideyoshi’s expeditions toward Korea in 1592 and 1597, to mark its establishment.

Since 2000, the group has visited many sites of the invasions in southern South Korea, including Busan, Yeosu and Namwon, to show repentance for the Japanese invasions of the neighboring country and denounce Japan’s aggressions in the region afterwards.