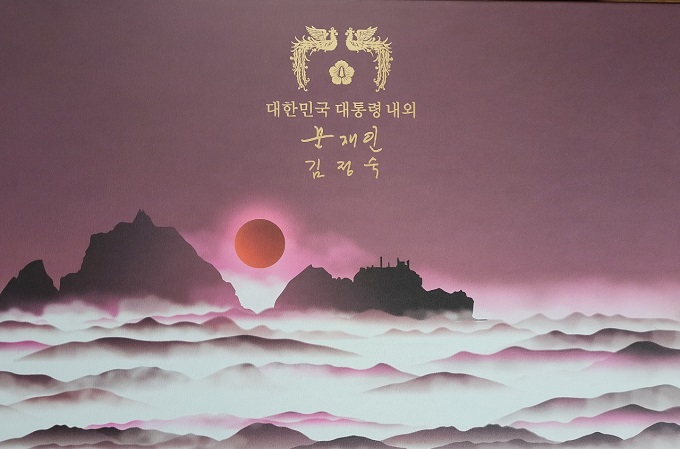 This photo shows the image on the box of South Korean President Moon Jae-in’s gift sent to foreign ambassadors in the country to mark the Lunar New Year. The Japanese embassy refused to receive it, as the image resembles Dokdo in the East Sea. (Yonhap)

South Korea’s presidential office Cheong Wa Dae had sent a gift box with traditional liquor and other items to Ambassador Koichi Aiboshi and other foreign ambassadors in Seoul to celebrate the Lunar New Year that falls on Feb. 1.

But the Japanese Embassy returned the gift on Friday, as the box has an illustration that resembles the image of Dokdo in the East Sea, according to the reports.

Upon the refusal, the embassy lodged a protest and renewed territorial claim to the islets.

The image of a sunrise is believed to represent South Korea’s commitment to overcoming the COVID-19 pandemic and starting anew in the new year. Dokdo is where people can watch the first sunrise.

The presidential office, however, did not make specific comments on the issue.

South Korea has been in effective control of Dokdo, with a small police detachment, since its liberation from Japanese colonial rule in 1945.

Still, Japan repeatedly claims sovereignty to the rocky outcroppings, making it a thorn in relations between the two countries.