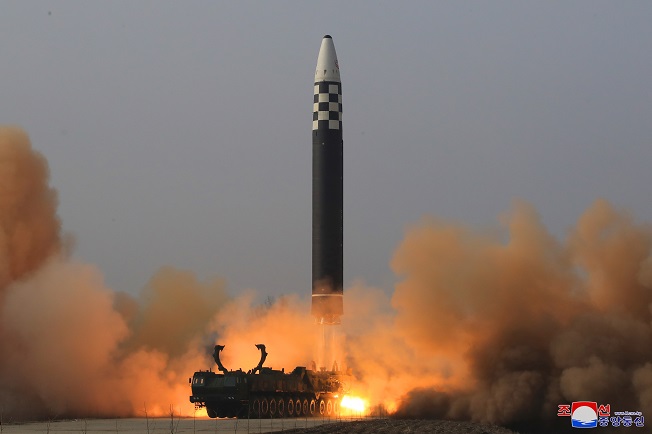 The North’s official Korean Central News Agency (KCNA) reported that at the behest of leader Kim Jong-un, the country successfully test-fired the Hwasong-17 ICBM on Thursday.

It stressed his policy to bolster the “powerful nuclear war deterrence qualitatively and quantitatively.”

Considering the specifics, the Hwasong-17 missile launch appears to represent progress in the North’s ICBM program.

Its previous ICBM test in November 2017 involved the Hwasong-15 missile, which Seoul officials said flew some 960 km at a top altitude of around 4,500 km.

Kim Dong-yup, a professor at the University of North Korean Studies, presumed that if launched at a normal angle, the Hwasong-17 could have flown more than 15,000 km — a range that can hit the whole of the continental U.S.

The so-called monster missile was first unveiled at a military parade in October 2020. It was put on a 22-wheel transporter erector launcher (TEL) compared with the 21-meter-long Hwasong-15, using the 18-wheel TEL. For its size, experts called the newest missile a “monster.”

Park Won-gon, a professor of North Korea studies at Ewha Womans University, noted that the long flight range means the missile can carry a more powerful warhead or multiple warheads if its range is adjusted to fly a shorter distance.

“When a missile has a range of 10,000 km, it can strike the U.S. mainland. But the Hwasong-17 is said to have a range of 15,000 km,” he said. “If the range is shortened, it may be able to carry a heavier warhead or more warheads for various operational functions.”

It is presumed to be a multiple independently targetable reentry vehicle (MIRV) carrying two or three warheads. But the North’s MIRV technology remains unverified.

Despite the North’s claim of the “successful” missile launch, questions linger over whether the North has mastered its atmospheric reentry technology.

It is required to ensure the missile’s warhead can withstand extremely high temperatures during reentry to Earth’s atmosphere. 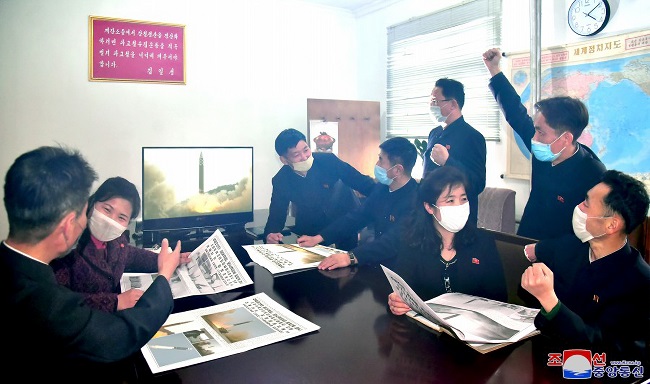 North Korean people cheerfully watch the news on the country’s recent ICBM test, in this photo released by the Korean Central News Agency on March 26, 2022. (Yonhap)

“As expected, the (first-stage rocket) appears to carry two twin Paekdusan engines — or four engines,” Chang Young-keun, a missile expert at the Korea Aerospace University, said. “It is the same body of the super-large missile showcased during the previous military parade.”

However, South Korean military authorities are said to leave open the possibility that the North’s latest launch may not involve the Hwasong-17 missile.

“With regard to the North’s report on the latest launch, the intelligence authorities of South Korea and the United States are conducting a detailed analysis with various possibilities in mind,” an official at Seoul’s Joint Chiefs of Staff told reporters on condition of anonymity.

Ahead of Thursday’s launch, Seoul and Washington accused Pyongyang of having tested a new ICBM system on Feb. 27 and March 5 ahead of a full-range launch. Last week, the North also unsuccessfully fired an apparent long-range rocket.

Observers said that all three recent launches appear to be part of the North’s project to enhance its ICBM capabilities.

This week’s ICBM test marked a reminder that Pyongyang has been doubling down on its key defense development projects unveiled at the eighth congress of the ruling Workers’ Party in January last year.

The projects included raising the “hit rates” of missiles with a range of 15,000 km, producing a “super-large” nuclear warhead and developing a hypersonic missile and an intercontinental ballistic missile (ICBM) using an “underground or ground solid-fuel engine.”

“The North has already said it would enhance the accuracy of the missile with a range of 15,000 km, which was a prelude to the launch of the Hwasong-17,” Park of Ewha Womans University said.

With the latest launch having ended its yearslong self-imposed moratorium on nuclear and ICBM tests, Pyongyang is expected to continue its provocative mode. Some expect it to conduct another ICBM launch on a normal trajectory.

Concerns have persisted that the North could stage a major show of force in time for the 110th birth anniversary of leader Kim’s late grandfather and national founder Kim Il-sung on April 15.