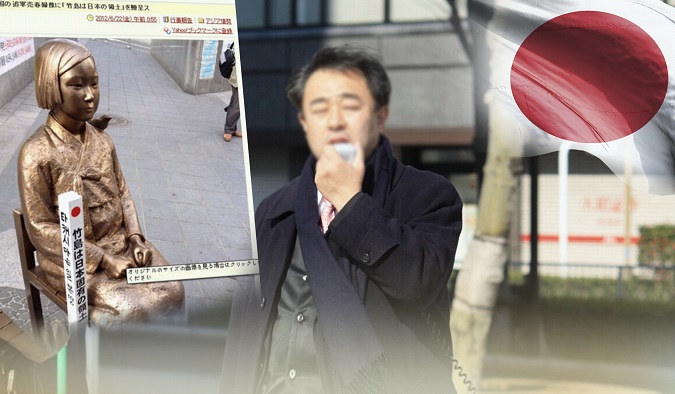 This composite photo shows Japanese national Nobuyuki Suzuki indicted in Seoul on charges of defaming sex slavery victims and the Statue of Peace in Seoul, and a provocative stake erected by him.

The Seoul Central District Court opened a hearing on the case of Nobuyuki Suzuki, known as a 56-year-old member of an ultra-right Japanese party, but indefinitely postponed his trial proceedings as he refused to make an appearance for the 20th time.

Suzuki is accused of setting up a provocative wooden stake beside the Statue of Peace commemorating victims of wartime sex slavery, in front of the Japanese Embassy in Seoul in June 2012.

On the stake, he wrote, “Takeshima is Japanese territory,” using the Japanese word for South Korea’s easternmost islets of Dokdo.

He was also charged with putting a similar stake near a monument of Yun Bong-gil, the late Korean independence fighter, in Japan. Seoul prosecutors indicted Suzuki in February 2013 on charges of defaming sex slaves and Yun.

The Japanese man was additionally indicted in 2015 for sending a provocative parcel to two Seoul facilities dedicated to the sex slavery victims.

Suzuki has been asked to appear in the Seoul court 20 times but never complied with the order. Most recently, his court hearing was called off on March 26.

The Seoul court expressed regret at the repeated postponements of trial proceedings for the Japanese defendant.

It also said the schedule for the next hearing will be set after receiving data on its request for the repatriation of the Japanese suspect, while asking the prosecution to pay continuous attention to the matter.