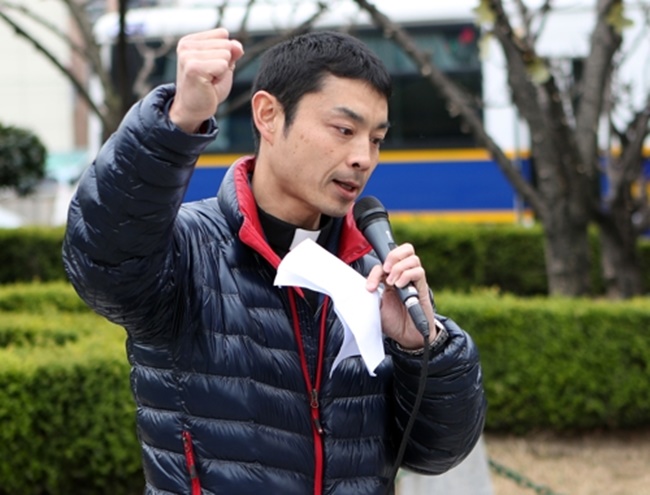 He went on, saying, “The Japanese government refuses to acknowledge its wrongdoings and continues to oppress the marginalized with a social structure built at the expense of them. (Image: Yonhap)

SEOUL, March 30 (Korea Bizwire) – A Japanese Catholic priest, Jun Nakai, expressed remorse and support at a demonstration yesterday for the comfort woman statue near the Japan Consulate General in Busan.

“When I saw a documentary four years ago about comfort women, I was shocked to hear from one survivor that the reason she asks for an apology from the Japanese government is not because of money but for Japan to be free from its sins of the past,”

Nakai said in his imperfect Korean.

He went on, saying, “The Japanese government refuses to acknowledge its wrongdoings and continues to oppress the marginalized with a social structure built at the expense of them.

“I would like to apologize on behalf of my government and look to a new future.”

Nakai has been engaging in political activities in South Korea from nuclear disarmament and opposing U.S. military bases to the ‘comfort woman’ issue.

As he is scheduled to return to Japan next week, he said he was planning to participate in protests calling for Japanese Prime Minister Abe Shinzo to step down.

He also expressed his hopes to erect a ‘comfort women’ statue in the hearts of the Japanese people he expects to meet at anti-Abe protests.

Since the monthly Wednesday demonstrations near the ‘comfort women’ statue in Busan began last February, Nakai is the first Japanese person to have visited the controversial site.