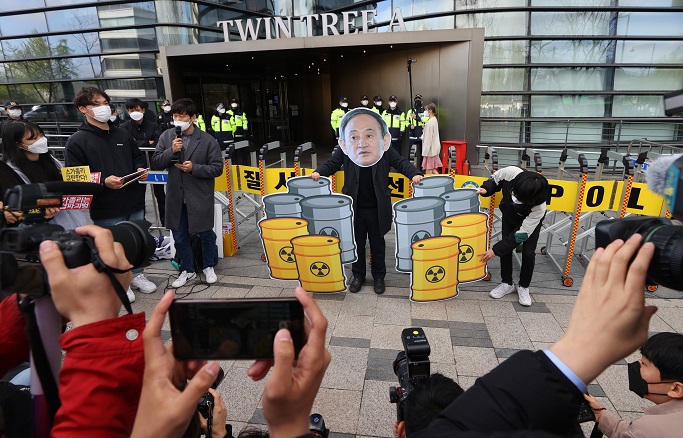 South Korean civic activists stage a protest against the Japanese government’s decision to discharge radioactive water from the crippled Fukushima nuclear plant into the Pacific Ocean during a news conference in front of the Japanese Embassy in Seoul on April 13, 2021. (Yonhap)

SEOUL, April 14 (Korea Bizwire) — On Tuesday, the Japanese government decided to dump contaminated water from the wrecked Fukushima nuclear plant into the sea, leading to a firestorm of criticism for the lack of consideration of neighboring countries.

Tokyo appears to have tried to appease domestic resistance against the plan but shows no attention to the concerns of its neighboring countries.

Government officials have dismissed the concerns about the impact of the contaminated water on human bodies as nothing but groundless rumors.

Tokyo also described the possible damage that such water could have on its fishery and tourism industries as ‘rumor-based damage’ or ‘rumor-based impact.’

Japanese authorities also underestimated the concern of consumers in and outside the country simply as unscientific attitude.

The Japanese government should take responsibility for the 2011 Fukushima nuclear disaster since it failed to properly manage the nuclear plant.

Concerns about Japan’s move were increased due to the lack of communication with those who would be directly or indirectly influenced.

With this in mind, the Japanese government’s description of such concerns as ‘rumors’ are very unilateral.

Even in Japan, there is criticism that the government made a hasty decision.

“The dumping of contaminated water into sea would take about 30 years and the national consensus is a prerequisite for such decision,” said Ryota Koyama, a professor at Fukushima University.

“Nonetheless, the Japanese government did not provide enough explanations to its people and the fishermen in the region. It’s too early to make such a decision.”

In recognition of the spreading domestic resistance, centered on the regional fishery industry, the government inserted the idea of providing compensation through Tokyo Electric Power Co., the plant’s operator, into its plan.

However, the Japan’s plan did not include any measures for neighboring countries such as South Korea and China, which could be directly or indirectly influenced by the dumping of the radioactive water.