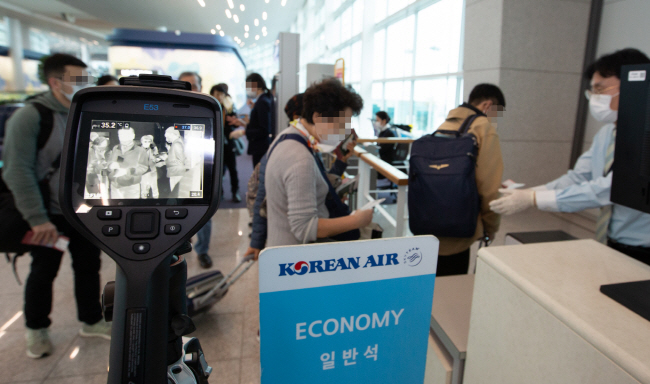 This photo taken on March 5, 2020, and provided by Korean Air shows a company employee checking the temperature of outbound passengers at a boarding gate at Incheon International Airport in Incheon, western Seoul.

Local airlines and travel agencies have been struggling with a sharp decline in air travel demand for more than a month after South Korea’s first confirmed COVID-19 case was reported on Jan. 20.

Adding to their woes, Japan announced Thursday that visitors from South Korea and China will be requested to be quarantined at designated facilities for two weeks and to refrain from using public transportation.

The restriction will be implemented from Monday through the end of this month. Japan also plans to suspend the 90-day visa-free entry program for South Koreans during the same period, according to diplomatic sources.

In response to Tokyo’s new entry restrictions, South Korea said Friday it will suspend a visa-free entry program for Japanese nationals from Monday.

The move prompted Korean Air Lines Co., the country’s biggest airline and national flag carrier, to suspend 16 of its flights on 17 routes, except for the Incheon-Narita route, to the neighboring country starting Monday.

Asiana Airlines Inc., the second-biggest airline, said Friday it has yet to make a decision on whether to suspend all of its flights to Japan due to Japan’s entry restrictions. It currently operates eight routes to six Japanese cities.

The two full-service carriers have continued to reduce or suspend flights on domestic and international routes since February.

Korean Air said 80 percent of its overall flights were not in operation as of March 2. It had provided passenger and cargo carrying services to 115 cities in 44 countries before the coronavirus hit.

Jeju Air Co., the country’s largest low-cost carrier, said it will continue to serve two routes from Incheon to Tokyo and Osaka. Thirteen out of its 15 routes to Japan are not in operation.

“We have made the decision as there is travel demand to the cities due mainly to business reasons, though passengers will have to undergo a two-week quarantine upon arrival in Japan,” a Jeju Air spokesman said.

As of Friday, South Korea had reported 6,284 confirmed cases of the novel virus and 42 deaths. At least 100 countries and territories plan to enforce or are imposing entry restrictions for visitors from South Korea.

Six other budget carriers — Jin Air, Air Busan, Air Seoul, Eastar Jet, T’way and Fly Gangwon — have already suspended all or most of their flights on international routes. Most of them have entered an emergency management system to stay afloat.

No flights to Japan from the country’s seven budget carriers will be available from Monday. 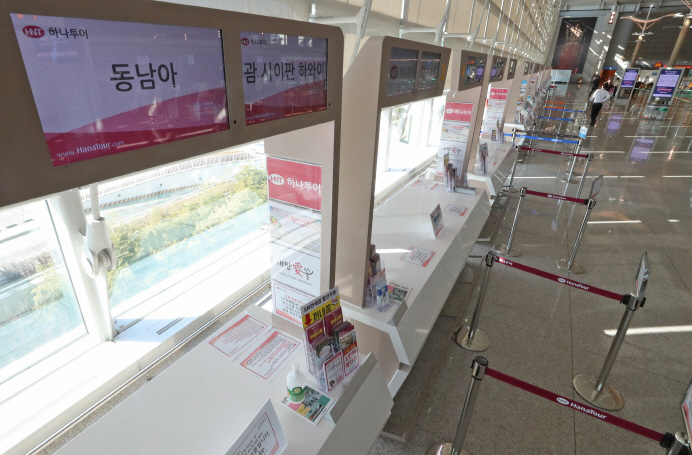 Vacant travel agency counters at the No. 1 Terminal of Incheon International Airport amid the spreading coronavirus outbreak on Feb. 9, 2020. (Yonhap)

Among industries affected by the virus outbreak, travel agencies are also bearing the brunt.

Most local travel agencies are deeply concerned about poor earnings results for the first quarter and a forced restructuring as bookings for overseas travel have fallen to rock bottom this month.

“The company asked all of its 5,000 employees to work for three days a week in March as there are no flight bookings for domestic and overseas travel,” Lee Jae-min, who runs a Hana Tour travel agency in Seoul, said.

Travel agencies — which mainly handle travel packages, business trips for local companies and cruise travel products — will suffer the most from the coronavirus fallout in terms of business results, Lee said.

The Korea Association of Travel Agents, which represents 1,200 out of the country’s 18,000 travel companies, is concerned that if airlines continue to suspend flights, many agencies will end up going bankrupt, KATA spokesperson Koo Jeong-hwan said.

“The airline and travel businesses are not alone. The virus outbreak is having negative implications for related industries — hotels, duty free shops and restaurants, to name just a few,” the spokesperson said.

KATA recently called for financial support from the government as their members badly need to maintain their workforce because the travel business, unlike manufacturers, depends heavily on experienced human resources, he said.

Airline and tourism stocks retreated Friday on concerns of poor earnings for the first quarter.