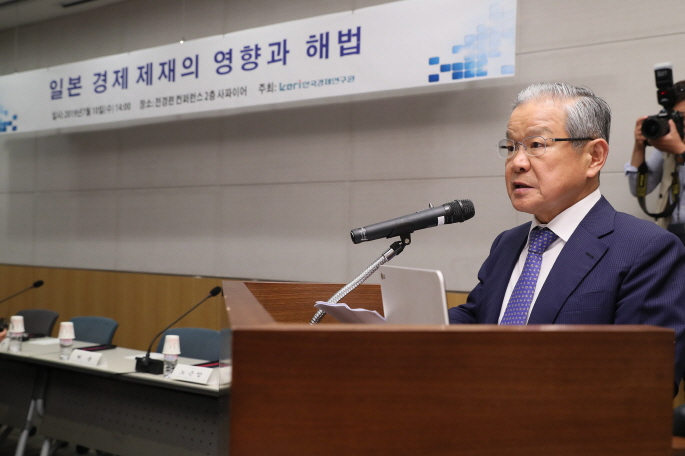 In a seminar on the impact of Japan’s trade curbs, Kwon Tae-shin, president of the Korea Economic Research Institute (KERI), said if Japan does not retract or negotiate its export restrictions, it will deal a blow to conglomerates such as Samsung Electronics Co. and SK hynix Inc. as well as smaller companies.

He urged the South Korean government to roll up its sleeves to resolve the issue before Japan’s export limits hurt the credit ratings of such companies and the country’s economic growth.

KERI researchers and economists who attended the seminar said any trade tensions between the neighboring countries will have a bigger impact on the Korean economy than on the Japanese economy.

They called on the government to resolve the issue through diplomacy.

“If Japan’s trade restrictions expand to other sectors, like automobiles and steel, we may not recover,” Cho said. “It’s a big loss that the government is not using a network of local business groups.”

In response, Japan announced last week it will restrict shipments to South Korea of photoresists and two other materials used in smartphone displays and chips.

Japan rejected the request, saying the measure is not a subject for consultation and that it has no intention of withdrawing the restriction.