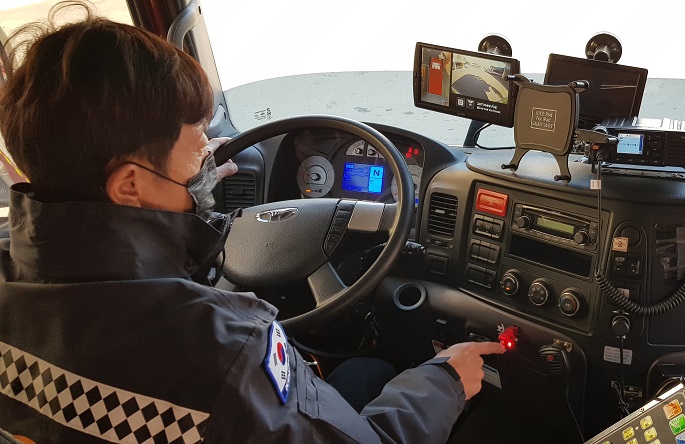 The signal system terminal set to be mounted on the city’s 61 fire trucks and emergency vehicles. (Yonhap)

SEOUL, Nov. 26 (Korea Bizwire) — The Jeju Fire Safety Headquarters announced a plan to launch from next year the full-scale operation of a new traffic light system that is designed to turn green when an emergency vehicle approaches.

The new traffic light system will be installed at 13 major intersections in downtown Jeju City, with the signal system terminal set to be mounted first on the city’s 61 fire trucks and emergency vehicles.

In Jeju, traffic lights at major intersections turn green at an interval of three minutes. However, if the new signal system is introduced, fire trucks and emergency vehicles won’t waste time on the road waiting for the lights to change.

The average dispatch time was also reduced by 1 minute and 1 second on the basis of a distance of 2.8 kilometers.

On the basis of a distance of 9.1 kilometers, it contributed to reducing the average dispatch time by 2 minutes and 32 seconds. Even during rush hour, the dispatch time was reduced by 36 seconds.