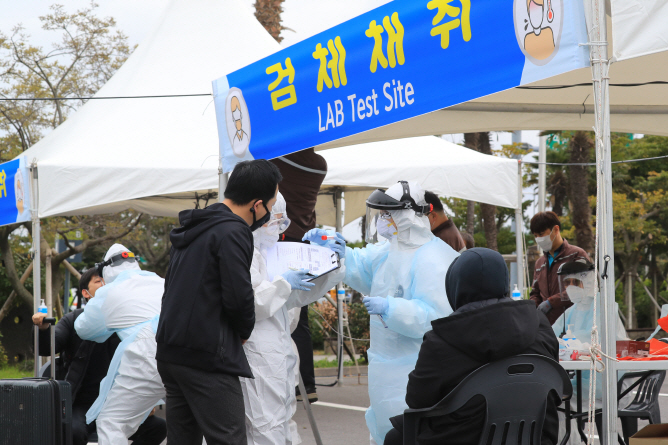 JEJU, April 28 (Korea Bizwire) — In the runup to an extended holiday this week, Jeju Island, a famous resort island in South Korea, is stepping up quarantine and pandemic prevention measures as it is bracing for a surge in incoming tourists during the time, officials said Tuesday.

The country is only two days away from the longest holiday period since the massive coronavirus outbreaks in late February to early March.

Starting on Buddha’s Birthday on Thursday, followed by Labor Day the next day, South Koreans will be enjoying as long as a six-day holiday till Children’s Day on May 5, the first extended holiday since COVID-19 restricted local trips, gatherings and outdoor activities.

As South Korea is gradually loosening social distancing guidelines on the back of the easing of COVID-19 here, combined with ongoing restrictions on overseas trips, nearly 180,000 tourists are expected to visit Jeju Island.

Bracing for the hosting of the massive tourist inflows, Jeju Island has announced unusually strict quarantine and virus test plans.

Starting on the first day of the long holiday Thursday, the island will require tourists with temperatures higher than 37.3 C, stricter than the usual 37.5 C level, as well as people with health problems to fill out a health check questionnaire upon arrival at Jeju International Airport, according to Jeju.

Medical doctors and workers will also be stationed at the airport to screen out suspicious coronavirus patients and have them tested at a special test center set up at the airport, the regional government also said. 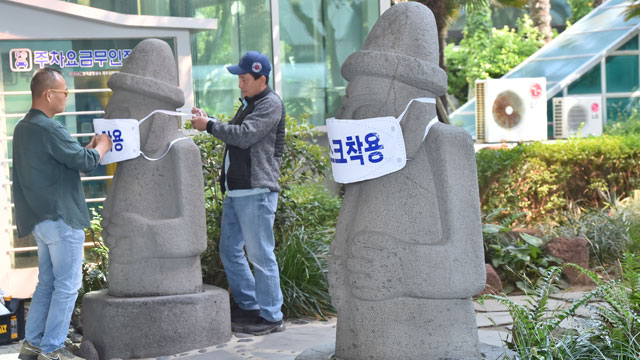 Officials in Jeju put masks on “dolhareubang” statues, a basalt totem statue that is a symbol of the tourist island, on April 28, 2020. (Yonhap)

At the arrival terminal of the airport, every traveler will also be required to undergo a one-on-one fever check while travelers who have been overseas in the preceding two weeks will be required to take a COVID-19 test within the first three days of their arrival at Jeju, the government said.

All the travelers using rented cars in Jeju will also be required to sign a letter of pledge that binds them to wear protective masks, record and report their travel routes, and immediately contact authorities in the event of having coronavirus symptoms.

In line with the preventive efforts, Jeju has also started a social campaign featuring masked “dolhareubang” statues, a basalt old grandfather statue that is a symbol of the tourist island, warning travelers against lingering risks of virus contagion.

Jeju had seen the size of its daily inbound travelers cut in half as the pandemic gripped the country, but the traveler inflow is fast recovering as the country is rolling back strict social distancing measures.

Some 66,000 travelers visited Jeju from Friday to Sunday, according to the regional government.

Since the first South Korean coronavirus case was reported in late January, Jeju has reported 13 cases so far and 12 of them were cases imported from outside of the island.