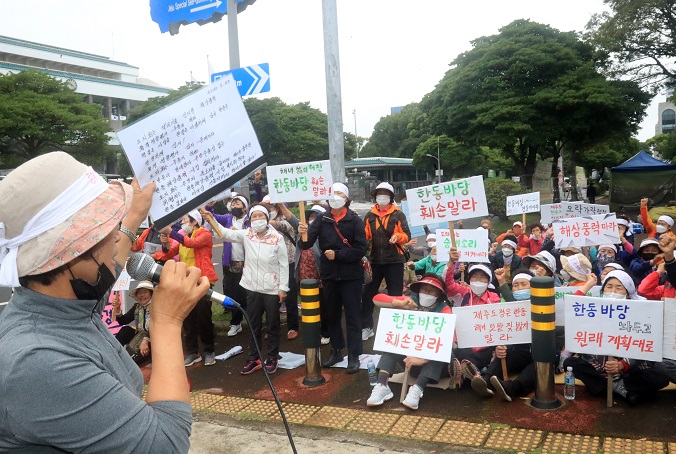 A group of haenyeos stages a protest in front of the Jeju Provincial Assembly in Jeju Island on Sept. 24, 2020. (Yonhap)

JEJU, Sept. 25 (Korea Bizwire) — A group of “haenyeo,” or female divers in Jeju Island have voiced strong opposition ahead of the Jeju Provincial Council’s deliberations on the motion of the environmental impact assessment for the offshore wind farm in Gujwa-eup.

About one hundred haenyeos who are members of the Handong-Pyeongdae fishing village fraternities held a press conference on Thursday in front of the Jeju Provincial Assembly, calling for the cancellation of the offshore wind farm project.

They claimed that unlike the Hanlim offshore wind farm project which underwent five rounds of deliberations, the Handong-Pyeongdae project had only a single round of deliberations.

Haenyeos insisted that despite the project threatening their right to survive, there has been no effort at all to communicate with the residents.

“Most members of the Handong-ri fishing village fraternities didn’t know anything about the motion regarding the designation of the area as a candidate site for the Dongbu offshore wind farm zone. The motion without any detailed meeting minutes is invalid,” haenyeos said.