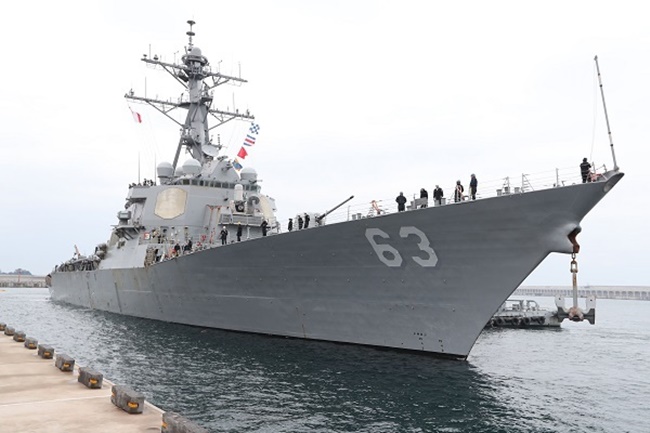 An Aegis-equipped US destroyer USS Stethem enters South Korea’s naval base on the southern resort island of Jeju on March 25, 2017, after taking part in the two countries’ joint drill from March 17-21. (Image: Yonhap)

SEOUL, March 29 (Korea Bizwire) – Concerns over further American military intervention are growing among residents of Jeju Island after the U.S. Aegis destroyer USS Stethem docked at the Jeju Naval Base before heading back to its home port in Japan.

Anti-war organizations and town councils based in Gangjeong village, where the Naval base is located, fear the first visit of a foreign warship to the naval base on the southern resort island might lead to the possible deployment of a larger-scale warships such as the USS Zumwalt guided missile destroyer or aircraft carriers.

Their fear stems from a report from 2013 called “Jeju Naval Base: Strategic Implications for Northeast Asia” by Commander David J. Suchyta, who was in charge of training and policy in Northeast Asia while serving in the U.S. Seventh Fleet, in which the visit of the USS Stethem to Jeju is described in detail almost like a prophecy.

As much of the speculation turned out to be true, the report is once again attracting attention years after its publication.

In the report, Suchyta explains the logic behind the choice of an Arleigh Burke-class warship for a visit to Jeju, saying that a ship of this type would be big enough to show America’s support for the U.S.-South Korea alliance, but too small for China to see as a threat of escalation.

He went on to discuss the length of the visit, saying, “The first visit should be short, no more than three days. A longer visit might stoke fears among both the local population and in China that the U.S. intends to establish a permanent presence.”

He also encouraged more community relations work in collaboration with the South Korean navy to build a better relationship with the civilian community in the region.

Suchyta also recommended that instead of rushing, the U.S. should to wait for the right opportunity to deploy an aircraft carrier to Jeju.

Some of his proposals in public affairs actually came into being. An increased number of community relations initiatives were carried out in accordance with the recommendations in his report.

However, Joshua Kelsey, a spokesman for the U.S. Naval Forces Korea, disregarded the growing concern over the correlation between the recent visit by the U.S. warship and the report as a mere coincidence.

Speaking to Yonhap News, Kelsey said that the report was written for academic purposes and doesn’t reflect the view of the U.S. naval forces in Korea.

In the meantime, growing concern over the possible expansion of U.S. military power in the region is seeing local residents gather in protest.

“The conflict with China over THAAD is taking its toll on our economy, but our government seems to be a puppet controlled by the U.S. government.

“I fear (the recent visit by the warship) could be a step towards the deployment of aircraft carriers,” one Gangjeong village council official said with worry.