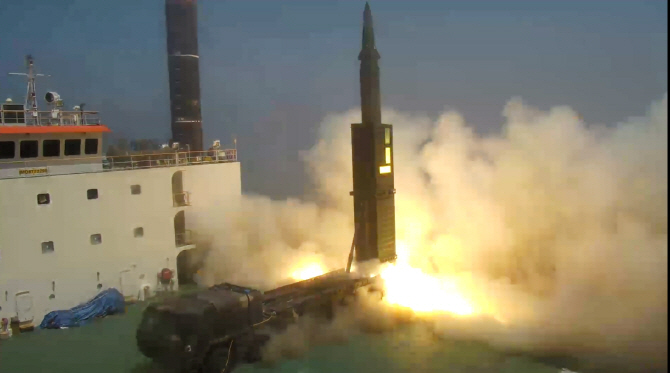 Hyunmoo-2, a new homegrown ballistic missile with a range of 800 kilometers, is test-fired from a mobile launch pad at a test site of the Agency for Defense Development in Anheung. (image: Min. of National Defense)

SEOUL, Jul. 24 (Korea Bizwire) — The South Korean government is pushing to revise the missile guidelines developed with the United States to double the maximum weight of warheads on Seoul’s ballistic missiles from the current 500 kilograms to counter growing threats from the North, sources said Monday.

The Seoul government proposed the revision in line with the Seoul-Washington summit last month, and is known to be planning to begin talks regarding the issue during the annual Security Consultative Meeting (SCM) and the Korea-U.S. Integrated Defense Dialogue (KIDD) later this year, they said.

In 2012, the allies revised the ballistic missile guidelines, allowing Seoul to extend the maximum allowable missile range to 800 kilometers from the previous limit of 300 km, against North’s advancing nuclear and ballistic missile capacities. Under the deal, Seoul can load up to 500 kg of warheads on missiles with the range of 800 km.

“Our military is reviewing various measures to counter North Korea’s nuclear and missile provocations,” a government official said, declining to comment on the possible revision.

North Korea has been seeking to develop a nuclear-tipped intercontinental ballistic missile capable of hitting the U.S., viewing its nuclear program as a deterrent against what it claims is Washington’s hostile policy against it.

Last week, South Korea proposed holding military talks with North Korea on July 21, and Red Cross talks on Aug. 1 to discuss reunions of families separated by the 1950-53 Korean War, but Pyongyang has remained silent over the offer.