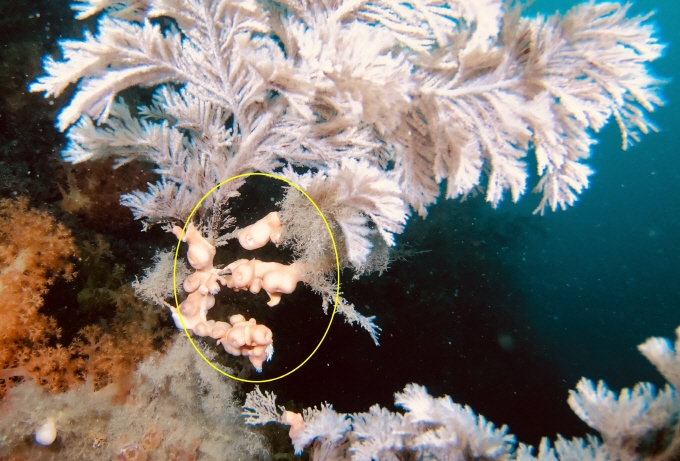 Black corals infested by sea anemones were found dying as the parasitic species deprived them of nutrients. (image: Green Korea)

JEJU, May 29 (Korea Bizwire) — Black corals, a legally protected species living off the coast of Jeju Island, are drastically plunging in population due to sea anemones.

Black coral, also known as the red pine tree of the sea, is an endangered species protected by the Cultural Heritage Administration (CHA), Ministry of Environment, and the Ministry of Oceans and Fisheries.

South Korean environmental organization Green Korea released a statement Thursday asking the three governmental agencies to “find out the cause of sea anemones spreading and killing the corals and come up with countermeasures.”

The organization reported that Luster sea anemones have been living off black corals in South Korea’s largest black coral habitat around Mun and Beom Islands off the coast of Seogwipo City, Jeju Island.

Black corals infested by sea anemones were found dying as the parasitic species deprived them of nutrients. Some sea anemones, initially living off the root, stem, or branch of corals, expanded their territory, taking over the coral entirely.

Some corals were found dead in several locations. The onslaught by Luster sea anemones is also being observed in the Hyeongje Island in Jeju.

Green Korea has been blaming the CHA, Ministry of Environment, and the Ministry of Oceans and Fisheries for failing to protect the black corals after designating them as protected species.

“Their failure leaves us with no reasons for conclusion as to why the Luster sea anemones have spread, because there is no precise monitoring data,” Green Korea said.