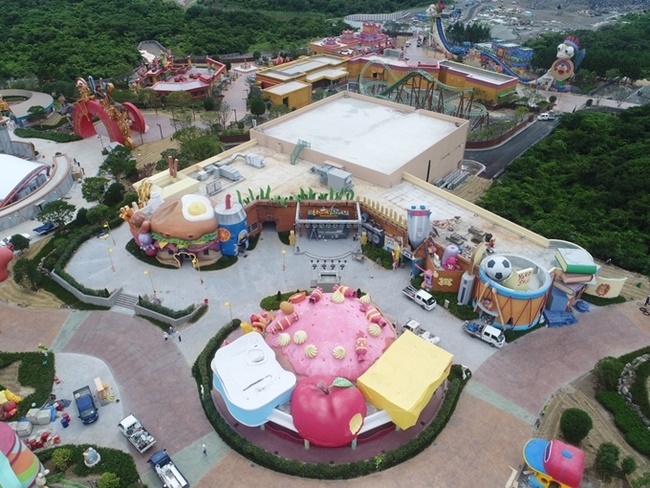 This picture taken on Aug. 8, 2017, shows a theme park in Jeju Shinhwa World under development in Jeju Island. (Image: Yonhap)

JEJU, Sept. 11 (Korea Bizwire) – Jeju Shinhwa World, a resort complex under development on the resort island of Jeju, is gearing up to open a theme park and a K-pop entertainment center, a provincial investment promotion center said Monday.

The resort project developed by Landing Jeju Development has opened in stages from earlier this year to offer over 300 condominiums and villas, and is set to open a theme park on Sept. 30, said Jeju Free International City Development Center (JDC), a government institution which promotes investment on the island.

Landing Jeju Development is a subsidiary of Hong Kong-based Landing International Development, which mainly invests in resort and entertainment businesses.

The resort will also have a cafe and a bowling alley designed by BIGBANG leader G-Dragon in YG Town, a K-pop and leisure complex tentatively named after YG Entertainment, next month, JDC said.

The resort, which spans approximately 2.5 million square meters, will gradually open other facilities, including a movie theme park, a casino, a K-pop entertainment center and a water park by 2019.

A movie theme park partnered by Lions Gate Entertainment Corporation, an American entertainment company, will open in the resort complex in 2019 to feature seven movie zones themed after blockbuster films, including “The Hunger Games,” “The Twilight Saga” and “Now You See Me.”

A total of 1.32 trillion won (US$1.18 billion) in foreign direct investment, mostly from Chinese citizens, has been injected into the 2-trillion-won project, JDC said, noting it is actively seeking funds from non-Chinese investors to diversify sources of investment.