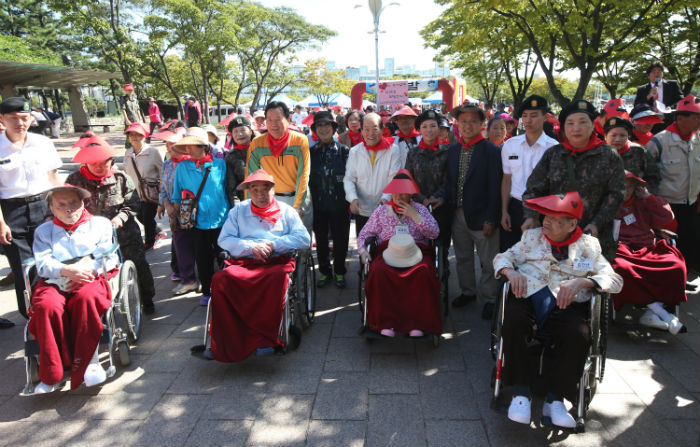 Representatives from one of Seoul’s district governments participate in a walk to raise awareness of dementia among the elderly in this file photo. (Yonhap)

SEOUL, April 12 (Korea Bizwire) — Seniors with a spouse suffering from dementia are more likely to be diagnosed with dementia themselves, a study showed Monday.

A research team from Seoul National University Bundang Hospital conducted a survey of 784 senior couples in the country who are over 60 years of age every two years from 2010 to 2020, as part of its Korean Longitudinal Study on Cognitive Aging and Dementia.

The research team explained that 40 percent of all dementia is caused by 12 variables that can be controlled by human behavior, such as education, smoking and depression.

Excluding the air pollution variable, the research team has kept track of the survey participants based on 11 controllable variables every two years, which showed that seniors with a spouse suffering from dementia are two times more likely to be diagnosed with dementia themselves than other couples.

Individuals with dementia are often cared for by their spouses, during which the patient’s risk variables are shared with the spouse, raising their chance of being diagnosed with dementia.

In fact, many of the couples participating in the survey have been sharing a number of risk factors such as the level of education, physical activity, smoking, external brain injury and depression.

Seniors with a spouse suffering from dementia were far more likely to suffer from depression and a lack of physical activity, raising the risk of dementia.