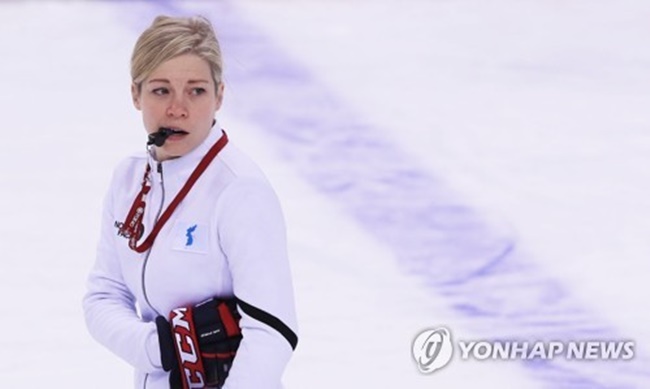 GANGNEUNG, South Korea, Feb. 5 (Korea Bizwire) – A hockey game is 60 minutes long, and it stands to reason that you’ve got to play hard for the whole 60 minutes to win, especially when you’re an underdog like Korea at the upcoming PyeongChang Winter Olympics.

When Korea — the joint team of players from the South and the North — lost to Sweden 3-1 in its first warmup game together Sunday, the playerssimply didn’t show up on time, their head coach said the following day.

“I think we need to make sure we start on time. We can’t start in the second period,” Sarah Murray told reporters Monday after running her first practice at Kwandong Hockey Centre in Gangneung, where her team will play all of its group games during the Olympics.

Korea gave up all three goals over the final five minutes in the first period. It fought back hard in the next two periods and refused to be simply pushed around but couldn’t dig out of a two-goal deficit against the No. 5-ranked opponent.

“The first period was a little bit shaky. We hadn’t played a game in a while,” Murray said. “We were down 3-1 after the first, and we had to fight our way back into the game. If we start on time, then hopefully, we don’t have to fight from behind.”

Murray and her players only arrived in Gangneung in the wee hours of Monday morning, and it was mostly the players who didn’t dress on Sunday that took part in Monday’s practice.

The joint Korean team, assembled only on Jan. 25, had been training behind closed doors at Jincheon National Training Center in Jincheon, some 90 kilometers south of Seoul. And it played its much-anticipated first game amid media frenzy and a capacity crowd of 3,000 at Seonhak International Ice Rink.

Murray said she didn’t realize just how much attention the team was getting until she got to the rink Sunday.

“When we were in Jincheon, we were kind of on an island. Nobody from the outside could come in,” she said. “We were just a team that was practicing and preparing for the Olympics. Until we got a police escort yesterday, we didn’t really think about (the attention).”