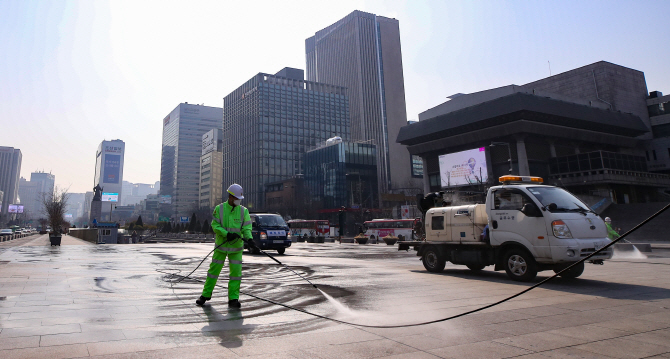 Officials from the Jongno Ward Office disinfect Gwanghwamun Square in central Seoul in an effort to contain the new coronavirus. (Yonhap)

SEOUL, Feb. 21 (Korea Bizwire) — Jongno Ward in central Seoul has reported the most cases of the new coronavirus in the capital, spawning concerns that the district with many senior citizens and commuters may be vulnerable to infections.

As of Friday afternoon, nine cases of COVID-19 infections had been reported in Jongno, according to public authorities. Seoul has reported 20 confirmed cases.

Jongno, located in the heart of Seoul, has a constant flow of commuters, visitors and travelers as it houses many companies, key government facilities — the presidential office Cheong Wa Dae and the government complex building — and public plazas.

The district also has the second-highest portion of people over age 65 in the capital, trailing Gangbuk Ward in northeast Seoul.

Experts said the demographic trend in the district may reveal its vulnerability to infections amid growing concerns that the virus has begun spreading locally. South Korea has reported one death of an infected patient, with the total confirmed cases at 204.

COVID-19 patients in Jongno have no records of foreign travel and an average age of 60, according to officials. In some cases, quarantine authorities failed to trace down exact infection routes, indicating that community transmission has begun.

To help contain the virus, the Jongno office has ordered an immediate suspension of operations at preschools and public facilities for senior citizens, including Tapgol Park, a hangout for the elderly.

The country, meanwhile, avoided the risk of shutting down the government complex building in Gwanghwamun that houses thousands of public servants after one official tested negative for the virus on Friday. 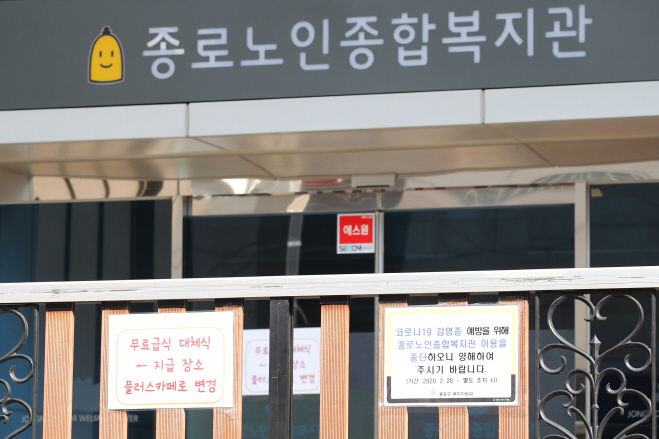 A sign announcing a temporary closure is posted on the door of a senior citizen center in Jongno, central Seoul, on Feb. 20, 2020, after a patient infected with the new coronavirus was confirmed in the district. (Yonhap)

In a drastic measure to curb the spread of the virus, Seoul Mayor Park Won-soon announced that the city government will ban the use of public plazas in central Seoul for outdoor rallies and shut down Shincheonji church services.

Massive weekend rallies in public plazas such as Gwanghwamun Square and Seoul Plaza have recently spawned concerns that COVID-19 could quickly spread in crowded places.

Park also unveiled plans to close down Seoul churches of the minor religious sect Shincheonji as a majority of the country’s cases are presumed to be linked to its provincial church in the southeastern city of Daegu.

The virus outbreak also affected politicians’ election campaigning in Jongno ahead of the April 15 parliamentary elections.

Former Prime Minister Lee Nak-yon voluntarily took a virus test earlier in the day as concerns about infection emerged due to his visit to the senior citizen center linked to confirmed cases. He and his wife tested negative for the virus.

Lee visited the center on Feb. 6, three days after the ward office disinfected the facility following days of closure.

Quarantine officials said Lee does not necessarily have to take the test, given his track record. But his decision reflects how politicians are prioritizing voters’ concerns about the virus outbreak in the run-up to the elections.

As a ruling party candidate, Lee will run in Jongno, a symbolic constituency in South Korean politics where key political heavyweights are elected.