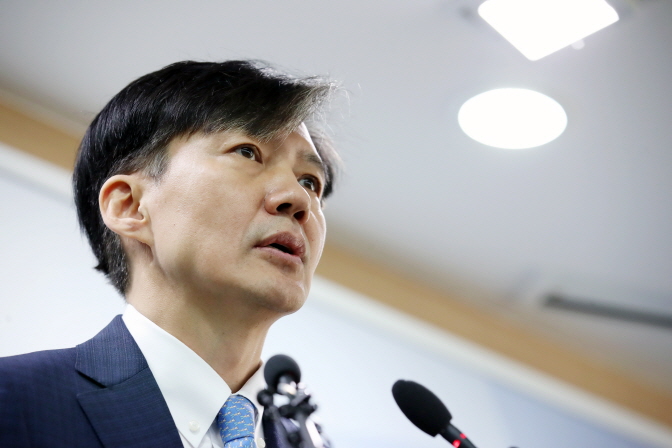 “I judged I should not add a burden to the president and the government regarding my family affairs. I think the time has come for me to step down for the successful completion of prosecution reform,” he said in a statement.

“I was mere ‘kindling’ for reforming the prosecution. My role as ‘kindling’ has come to an end.”

Cho was widely seen as the key man to push ahead with President Moon Jae-in’s prosecution reform drive.

Moon voiced regret over Cho’s departure but also applauded his efforts to push forward with the reform drive.

“I had hoped for a prosecution reform by the fantastic combination of Justice Minister Cho and Prosecutor-General Yoon Seok-youl, but it has become a dream-like hope,” he said in a meeting with senior aides, according to the presidential office.

The president also said that Cho helped raise awareness of the need for prosecution reform and created “big traction” toward that end.

The surprise announcement comes amid a widening probe over alleged corruption by his family.

His wife is suspected of forging a university award to help the couple’s daughter gain admission to medical school and of involvement in a dubious private equity fund investment.

It also comes roughly a month after Cho, who previously served as a senior presidential aide for civil affairs, was appointed justice minister despite heated opposition from the conservative bloc.

The president appointed Cho to the post on Sept. 9, saying it would be a “bad precedent” to not appoint Cho solely based on allegations that have not been confirmed, referring to doubts over his family.

Just a few hours earlier, Cho held his second press briefing as a justice minister on measures to reform the prosecution.

Cho stressed the importance of reforming the prosecution.

“South Korea’s power comes from the people. No power can stand above the people. An organizational culture that is for the people and that is people-centric should be established at the prosecution,” he said.

In the statement indicating his resignation offer, Cho mentioned the ongoing probes of his family.

“I felt apologetic to the people regarding the ongoing probes of my family but put in my best each day as justice minister to reform the prosecution. But now my role has come to an end,” he said.

“Now I hope to put everything down and take care of my family, who are going through the toughest and most painful time of their lives.” 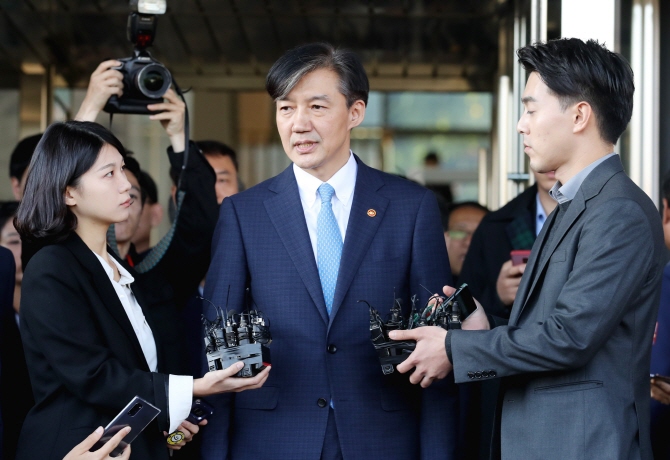 Justice Minister Cho Kuk talks to reporters as he leaves the ministry complex in southern Seoul after announcing his resignation offer on Oct. 14, 2019. (Yonhap)

Cho’s family, including his wife, daughter and son, have been questioned by the prosecution several times regarding suspicions over the family’s private equity investment and college admission.

A court procedure involving his wife, a university professor surnamed Chung, was scheduled to start Friday.

Following the announcement, Moon delayed his weekly meeting with his senior aides by an hour to 3 p.m., according to the presidential office.

The president initially planned to make opening remarks mainly on the economy. But he’s expected to express his view about Cho’s decision and prosecution reform.

The controversy surrounding Cho developed into a social phenomena involving the issues of education, political beliefs and judicial reform.

Tens of thousands of people held candlelight rallies in southern Seoul over three weekends, voicing support for Cho and his prosecution reform plans.

Opponents, however, also staged massive protests in Gwanghwamun, demanding his resignation. Conservative politicians even went on to shave their heads in groups in protest of Cho’s appointment.

The issue sparked a debate on fairness in the education system as critics claimed Cho’s children enjoyed benefits that landed them places in prestigious schools.

Cho’s defenders, however, claimed there were no wrongdoing in the process.

Cho said he is “especially sorry to the youth who were hurt” and also expressed gratitude to supporters of the reform drive, saying he “was able to hold on thanks to their will and hearts.”