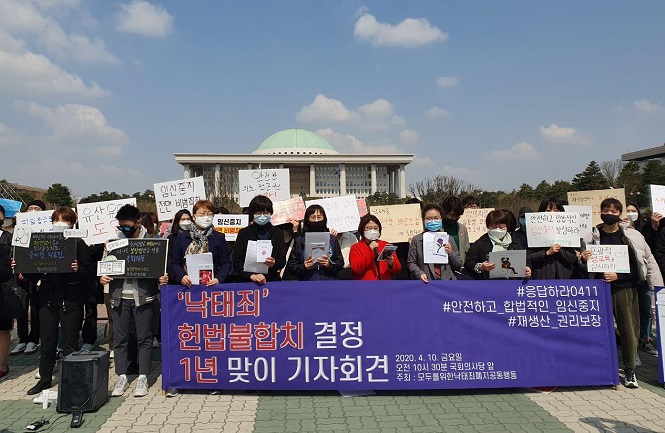 SEOUL, Aug. 14 (Korea Bizwire) — The Ministry of Justice said it is working on revising a 67-year-old criminal law that made abortion a crime punishable by up to three years in prison.

The Committee of Gender Equality under the ministry confirmed Friday that it is drafting a policy recommendation for the ministry to move closer to repealing the decades-old law.

The belated move came more than a year after the country’s Constitutional Court declared in April last year in a landmark ruling that the anti-abortion law is unconstitutional by violating a woman’s right to choose.

At that time, the court gave the National Assembly until the end of this year to revise the law. The law will become null and void if the deadline is not met.

According to the two articles of the country’s Criminal Act, which was made into law in 1953, a woman who “procures her own miscarriage through the use of drugs or other means” shall be punished by imprisonment of up to one year or by a fine of up to two million won (US$1,685).

Abortions are only legally allowed in case of a rape or when carrying the pregnancy is likely to put the expectant mother’s health at great risk.

The same court in 2012 ruled that the law is constitutional, citing that a fetus’ right to life is as important as that of a woman and that allowing abortion would make it rampant.

But women’s rights activists have been arduously calling for abolishment, arguing that making it a criminal offense only deteriorates the situation where a medical procedure to terminate a pregnancy takes place anyway and that many women face greater health risks during the illegal process.

In April, a coalition of women’s groups held a press conference in front of the National Assembly in commemoration of the first anniversary of the court’s ruling, calling for a swift action to repeal the law.

“The reality facing (South Korean) women who have to endure violence and stigma (associated with abortion) did not change,” said Na Young, head of Share, a women’s rights group.

“The government and the National Assembly should act to protect women who undergo an abortion, and not let them suffer alone.”

The committee said it will make an official policy recommendation next week.