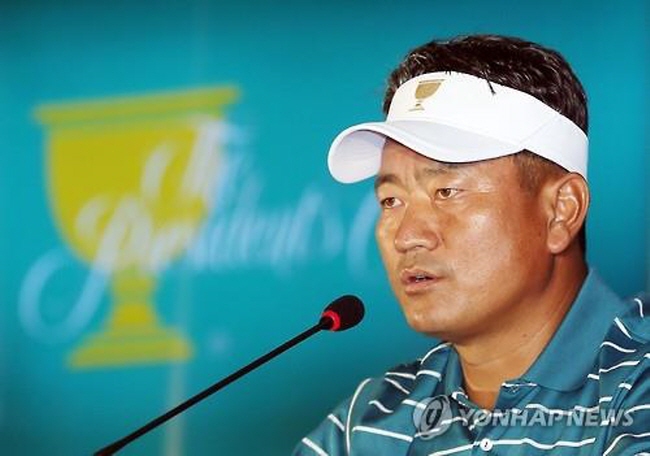 Choi Kyoung-ju, vice captain of the International Team at the Presidents Cup, speaks during a press conference in Incheon on Oct. 6, 2015. (image: Yonhap)

INCHEON, Oct. 6 (Korea Bizwire) — As vice captain for the International Team at the Presidents Cup on his home soil, South Korean veteran Choi Kyoung-ju said Tuesday he relishes the opportunity to promote the culture of his native land to players from around the globe.

Choi, an eight-time PGA Tour winner more commonly known as K.J., will be a non-playing vice captain to captain Nick Price, as the International Team readies to take on the U.S. Team at the biennial competition starting Thursday at Jack Nicklaus Golf Club Korea in Incheon.

It will be the first Presidents Cup in Asia, and Choi, who has competed in three Presidents Cups, said he hopes the players from both teams will get to know a bit more about South Korea during their stay here.’

“Well before the Presidents Cup, many players kept asking me about the course and the climate, among other things in Korea,” he said at a press conference at Jack Nicklaus Golf Club Korea. “And they’ve told me everything has exceeded their expectations, from the course conditions to their hotel to food and the reception they got from the fans. They feel very welcome here.”

Choi said nothing introduces foreigners to a new culture better than local cuisine. He has made a reservation at a Korean restaurant for members of the International Team and their spouses and partners for Tuesday evening.

“One of the team officials checked out the restaurant, and it apparently serves 70 side dishes,” Choi said, drawing incredulous laughs from the audience. Choi caught himself and added with a smile, “Actually, it’s probably seven or eight.”

Choi thanked the South Korean people for having set up a great competitive environment for the players.

“I know the players from both teams well, and I think they’re relaxed and ready to go,” he said. “With the great support from our fans here, I promise we will put on a thrilling show together.”