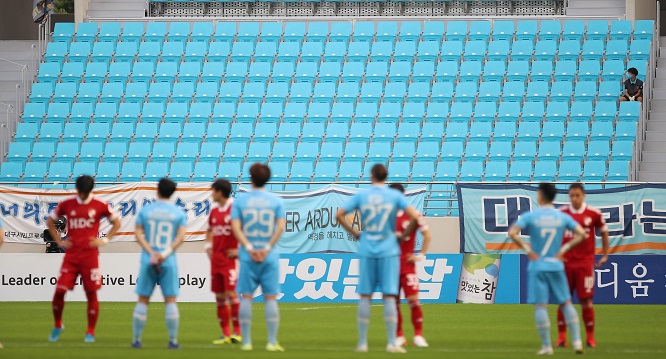 A K League 1 match between Daegu FC and Busan IPark takes place at an empty Forest Arena in Daegu, 300 kilometers southeast of Seoul, on July 26, 2020. (Yonhap)

SEOUL, July 31 (Korea Bizwire) — The winning rate of home teams has fallen by about 10 percentage points in the 2020 season of the nation’s professional football league, which is now underway without spectators due to the outbreak of the coronavirus.

After 13 rounds in the top-division K League 1 and 12 rounds in the second-tier K League 2, the winning percentage of home teams declined by about 10 percentage points compared to previous years, the Korea Professional Football League said Thursday.

Among the 137 games played thus far this year, 43 games were won by home teams and 38 games ended in a draw.

Calculating games ending in a draw as half of a win, home teams recorded a winning rate of 45.2 percent.

This figure is nine percentage points lower than 54.2 percent, the number representing the average winning rate of home teams for the 7,845 games played since the K League’s region-based policy was settled in 1987.

The winning rate of home teams in the K League 2 slid further to 39 percent from 50.5 percent over the same period.

These results can be taken as an evidence indicating that the cheering of home supporters has an actual impact on the fortunes of home teams.