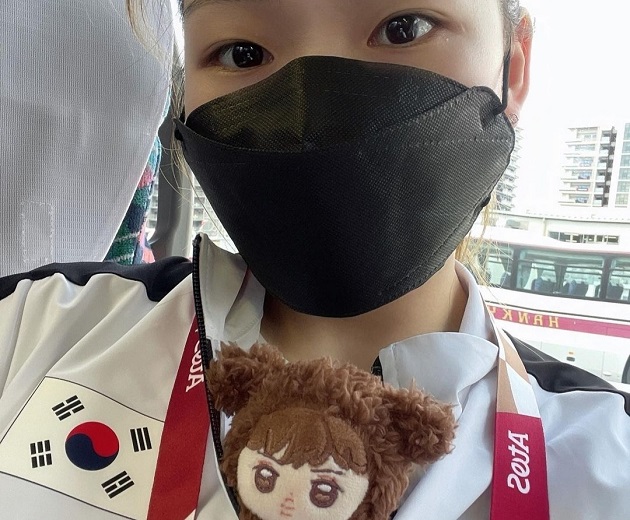 SEOUL, July 29 (Korea Bizwire) — Many K-pop fans around the world are dreaming of becoming so-called “successful fans,” referring to those who get noticed by their idols or have an in-person meeting with them.

At the ongoing Tokyo Olympics, young Korean athletes have become the envy of those K-pop fans, as the athletes have gotten direct support from their idols.

Ham Eun-ji, who finished seventh at the women’s -55kg weightlifting, is a fan of boy band The Boyz. The 24-year old weightlifter posted a photo of herself with a doll of the group on social media after making her Olympic debut Monday.

Shortly after this posting, she was surprised by an unexpected message from Sunwoo of The Boyz saying, “I’m very proud of you. Thank you.”

She did not hide her enthusiasm for becoming a successful fangirl, uploading Sunwoo’s message and saying, “I’m so excited. My hands are quivering.”

She had an impressive seven-set victory against 58-year-old Xia Lian Ni of Luxembourg on Monday.

V, apparently Shin’s favorite member of the seven-piece act, has returned the love by posting a message of support for the Olympic athlete. 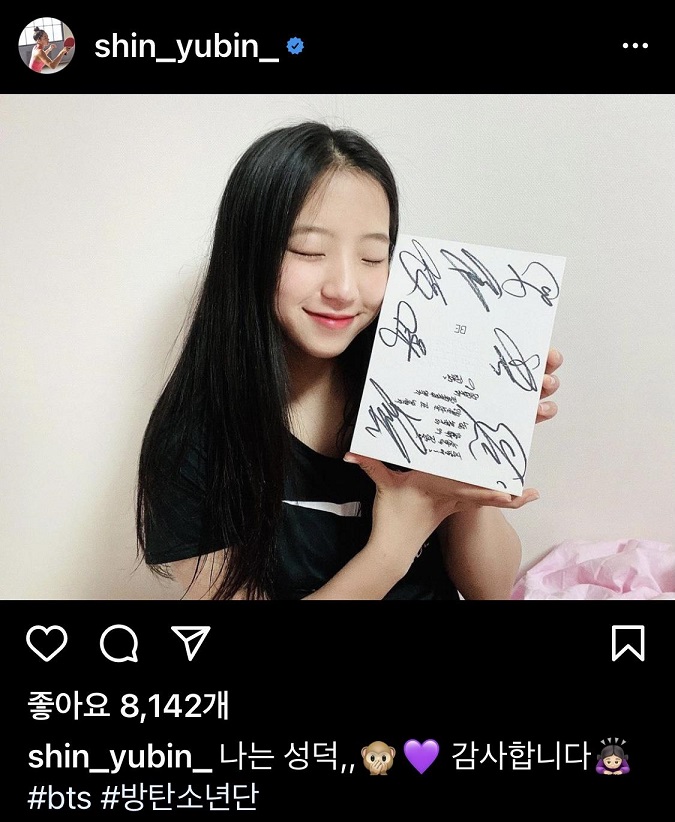 This screenshot of a June 15, 2021, post from South Korean table tennis player Shin Yu-bin’s Instagram account shows the Olympic athlete posing with an autographed album from members of BTS.

Archer An San, 20, who won two gold medals at the mixed team and women’s team events, is widely known as a hardcore fan of girl group Mamamoo. She is competing at the Olympics with the group’s pin badge attached on the back of her uniform.

She was stoked by a direct invitation to a concert of Mamamoo, who mentioned its gratitude to the archer and delivered a supportive message during an online broadcast.

Swimming sensation Hwang Sun-woo, who broke Korean records at the men’s 100m and 200m freestyle events in Tokyo, is another successful fan in the South Korean Olympic squad.

He has revealed during press interviews that he is a fan of Jennie and Yeji, members of K-pop girl groups BLACKPINK and ITZY, respectively.

Yeji posted a photo of the finger heart gesture before the men’s 200m freestyle finals on Tuesday, saying, “Go for the finals. I’ll root for you.”