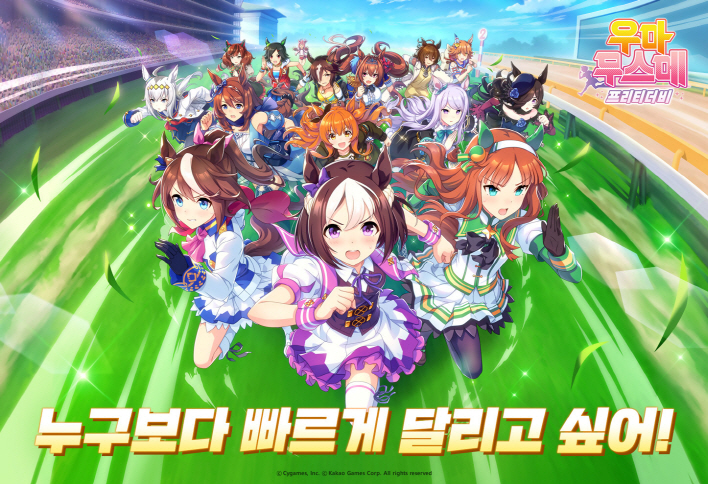 SEOUL, Sept. 7 (Korea Bizwire) — Kakao Games Corp. has been caught up in a storm of user complaints over questionable management of the South Korean version of Japanese mobile title “Uma Musume Pretty Derby,” with many gamers threatening to sue the company over purported neglect of Korean users when compared with Japanese players.

First released by Japan’s Cygames in 2021, the Korean version of the mobile simulation title was published by Kakao Games, the gaming unit of South Korean tech giant Kakao Corp., in June.

In the live service game, users train and develop their uma musumes, or “horse daughters” in Japanese, through derby competitions.

The title was the biggest new release for Kakao Games this summer and remains one of the top downloaded games on major mobile app stores in South Korea this year.

Since August, a flood of user complaints have surfaced over the game’s official online community site alleging Kakao Games of poorly managing the South Korean service.

Notably, users pointed toward what they called belated notices of major live events on the platform when compared with the management on the Japanese server.

Some 7,500 refund demand posts have appeared online, with the total refund demand estimated at over 8.4 billion won (US$6.06 million) as of Saturday.

The company’s stock price plunged over 5 percent last Thursday when the news of a possible suit first surfaced. 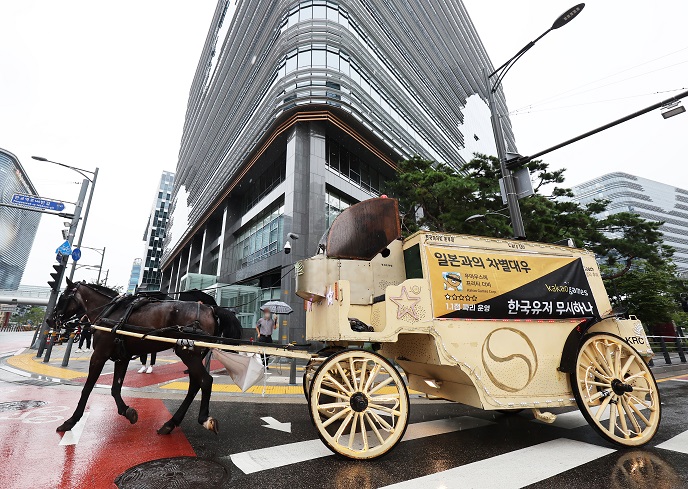 In this file photo, a horse-drawn carriage travels down the street in front of the office building of South Korean gaming company Kakao Corp. in Seongnam, south of Seoul, in protest of the company’s purportedly poor management of mobile title “Uma Musume Pretty Derby” on Aug. 29, 2022. (Yonhap)

Disgruntled players even organized a widely-reported demonstration event — in which a real horse-drawn carriage with a banner criticizing Kakao Games was mobilized — in front of the company’s headquarters in Seongnam, south of Seoul, in late August.

In light of the growing controversy, Kakao Games CEO Cho Kye-hyun issued a statement Saturday apologizing for the company’s “insufficient management,” and promised to improve the service by reviewing and updating the game from the perspective of users.

As a follow-up measure, Kakao Games said Monday it was arranging an in-person meeting between the company and users to discuss issues surrounding the user confidence fallout.

The controversy is also apparently spilling into politics. Rep. Ha Tae-keung of the ruling People Power Party recently asked South Korean users explain to him the key issues surrounding the game. Ha has been a vocal advocate of consumer rights in the gaming sector.

Rep. Lee Sang-heon of the main opposition Democratic Party also pointed out there were “various problems” surrounding the game management of Kakao Games and pledged to improve game consumer protection through legislation.