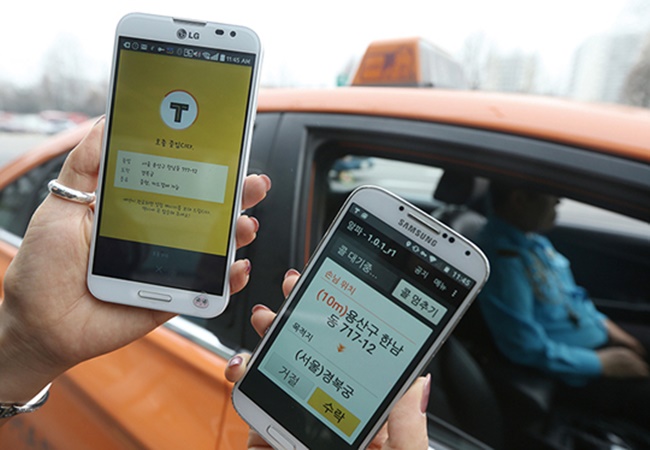 Despite the findings from a recent survey of KakaoTaxi users that indicated customers were willing to spend an additional 2,478 won, the company estimates more than 50 percent use the app for short trips, generating minimal revenue, which the company wishes to increase through in-app advertising. (Image: Yonhap)

SEOUL, Jul. 24 (Korea Bizwire) — The division at Kakao Corp responsible for its taxi-hailing and chauffeur services is being separated from South Korea’s largest messaging company, and will be launched as an independent entity next week.

Starting in August, Kakao Mobility will operate as an independent entity, separated from its parent company Kakao Corp, with some 150 former employees and Vice President Jung Joo-hwan making the move to lend support, as the former division of the South Korean messaging giant plans to focus on its online to offline services including taxi hailing app KakaoTaxi and substitute driver service KakaoDriver.

Though the spinoff comes to little surprise as industry sources predicted the messaging giant’s move in June, the company’s massive user base is expected to reshape the e-hailing industry.

KakaoTaxi boasts over 3.7 million monthly active users among Android smartphone owners alone, with a daily average of 1.5 million rides, while over 2.7 million people have registered for KakaoDriver, with nearly seven in ten users reusing the app within the following four weeks.

It was these striking business metrics and an already established user base that prompted a 500 billion won ($448 million) investment from a consortium led by U.S. private equity giant TPG, which has invested in Uber and Airbnb in the past, bringing the company’s valuation over 1.6 trillion won.

While Kakao is exploring the possibility of cooperating with German car manufacturer Volkswagen for its smart mobility business, according to industry reports, the biggest challenge facing the soon to be launched subsidiary is finding a new profit model.

Despite the findings from a recent survey of KakaoTaxi users that indicated customers were willing to spend an additional 2,478 won, the company estimates more than 50 percent use the app for short trips, generating minimal revenue, which the company wishes to increase through in-app advertising.

“As we focus on generating profits, a number of business models are being considered,” an official at Kakao Corp said.

By the end of this year, Kakao Mobility plans to introduce a business taxi reservation and parking services.