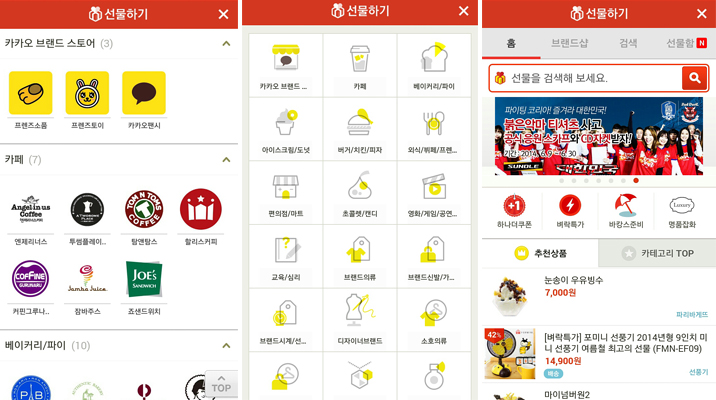 On July 1, Kakao released a press statement that it would provide its own coupons to the users in its “Sending Gif” mobile coupon service by itself excluding the existing coupon providers. (image: Kakao)

SEOUL, July 4 (Korea Bizwire) – As Kakao Inc. decided to jump to the fray in the local mobile coupon business, the online coupon companies which sell the digital coupons on the popular Kakao platform, are fretting over the mobile messenger giant’s possible unfair competition in the market, even considering a lawsuit against Kakao for breaching the fair trade regulation.

On July 1, Kakao released a press statement that it would provide its own coupons to the users in its “Sending Gift” mobile coupon service by itself, meaning it wants to rule out the existing coupon providers’ service on its platform. As the contract terms with its existing four coupon providers are to be expired as of June, Kakao is gearing up for operating its own coupon business, increasingly lucrative market in the domestic online platforms.

According to industry sources, the coupon providers including SK Planet, KT Mhows, and Wincube Marketing are watching the Fair Trade Commission‘s next move in a response to Kakao’s decision. According to the coupon providers, Kakao’s unilateral termination of the existing contracts by using its dominant market position constitutes an act of unfair trade.

An official at SK Planet said, “We have not yet decided on how to counter Kakao’s contract termination to push their own coupon business. As Kakao already has begun operating its own mobile coupon service, we will challenge this issue with the commission as soon as possible.”

Another official in the industry said, “In fact, the coupon service operators gained profits taking advantage of Kakao’s ‘Sending Gift’ feature. Now, Kakao seems to take away the profits as their new revenue model as the related market volume rises to 500 billion won a year.”

Meanwhile, Kakao maintained its stance that there is nothing wrong with the process. An official at Kakao said, “If the coupon providers take legal action, we will make a stern countermeasure against them.”

The Kakao official explained, “The termination of the contracts was caused by normal time lapse and we already notified our plans to the providers. Moreover, our mobile coupon service is for the benefit of the users who routinely grumbled about the short expiration date of the coupons and complicated refund policies.”