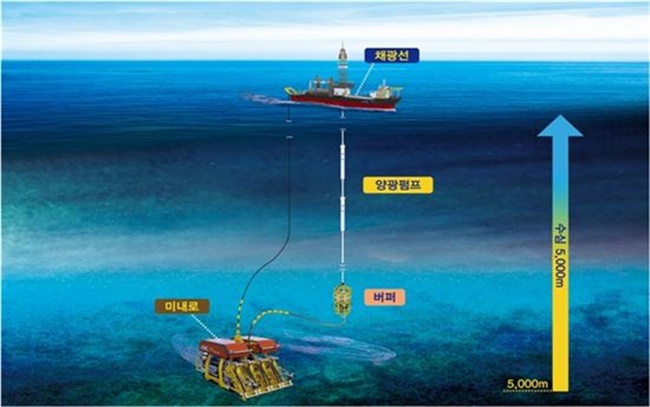 The signing ceremony was attended by Minister Kim Young-choon and Michael Lodge, Secretary-General of the ISA. (Image: MOF)

SEOUL, March 28 (Korea Bizwire) — South Korea has landed the exclusive rights to explore a deep-sea manganese pavement mine lot in the western Pacific.

Under the contract signed between the Ministry of Oceans and Fisheries and the International Seabed Authority (ISA) on Tuesday, South Korea will be able to explore cobalt rich ferromanganese crusts in the Magellan Seamounts located in international waters of the western Pacific.

The signing ceremony was attended by Minister Kim Young-choon and Michael Lodge, Secretary-General of the ISA.

Found on the slope of sea mountains located 800 to 2500 meters sea below sea level, manganese pavements, also known as ‘underwater mines’, contain a number of metals including nickel, copper, cobalt, and other natural resources used as industrial material.

The oceans ministry estimates the mine lot contains nearly 40 million tons of manganese pavements that are rich in rare earth resources, which are valuable for the IT industry.

Located between 800 and 2500 meters below sea level, the cost of extracting the resources is also expected to be more affordable than mining at deeper depths, the ministry added.

A third of the allocated mining area will be selected by 2028, with further plans to secure mining rights in 2033.

South Korea launched a total of six preliminary explorations between 2013 and 2015, becoming one of only three countries in the world to secure exclusive exploration rights to three major sources of marine resources this year including manganese pavements, manganese nodules and sea-floor hydrothermal deposits, joining Russia and China. 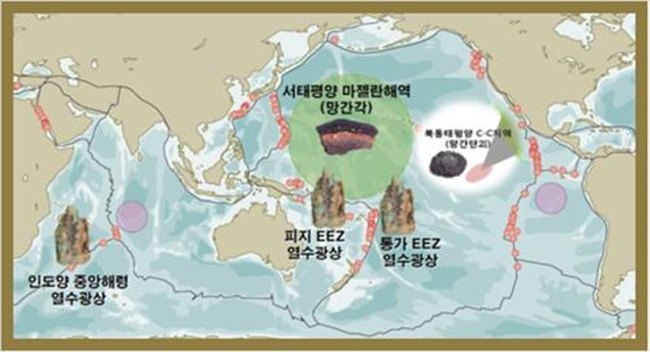 South Korea has landed the exclusive rights to explore a deep-sea manganese pavement mine lot in the western Pacific. (Image: MOF)

The latest exploration contract with the ISA marks the fifth deep sea mining area secured by South Korea, giving the country a total of 115,000 square kilometers of sea bed in economic activity area.

The government estimates economic benefits worth up to 11 trillion won will be generated over the next two decades, by producing 1 million tons of manganese pavements and substituting imports.