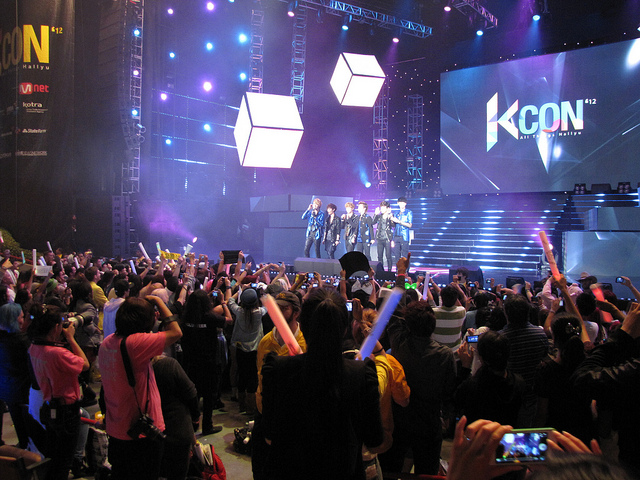 The words that were used the most were KCON, KCON LA, GOT7, Super Junior, Kpop, Crush, Girls Generation and KCON NY. (image: Peter Kaminski/flickr)

SEOUL, Aug. 25 (Korea Bizwire) – Research shows that Hallyu fans in 200 countries around the world showed interest in KCON America 2015, which is the biggest Korean wave convention in North America.

The LA office of the Korea Creative Content Agency (KOCCA) investigated Twitter messages related to KCON 2015 with USC professor Kim Sun-ho, a big data expert. The research looked into tweets about KCON written in English from 6 p.m. on July 27 to August 9 at midnight. The number of collected tweets was 916,031, and the size of the database was 17 gigabytes.

The words that were used the most were KCON, KCON LA, GOT7, Super Junior, Kpop, Crush, Girls Generation and KCON NY.

After going through a sentiment analysis of the messages, most of the tweets were positive and friendly towards the artists that participated. Words like ‘Love’, ‘Beautiful’, ‘Like’, ‘Laugh’, ‘Cute’ and ‘Thanks’ were used frequently.

Most of the tweets were related to K-Pop, and mentions regarding K-Dramas, K-Food and K-Beauty were scarce.

The KOCCA offered its take on the results of the analysis. “Seeing that tweets on KCON came from over 200 countries, it is an event that is gathering attention from all over the world. However, the fact that many think of it as a K-Pop event is a matter that we need to consider. In order to establish KCON as a general convention of Hallyu, it has to have a variety of content other than K-Pop.”