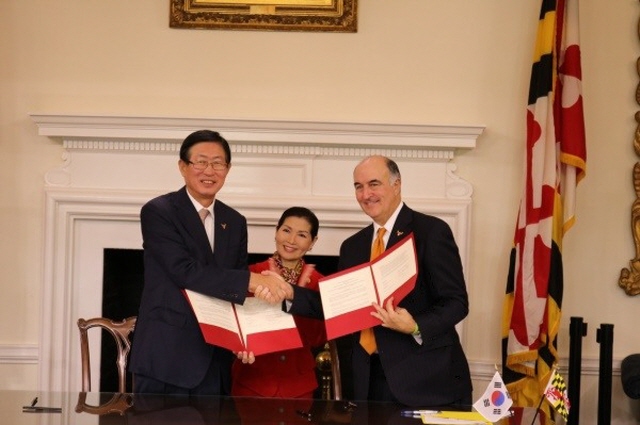 SEJONG, Oct. 16 (Korea Bizwire) — South Korea’s state-run power monopoly said Friday that it has reached an agreement with Maryland to work together on the development of the new energy sector.

The state of Maryland is ideally situated between cities like New York and Washington and has large-scale electricity infrastructure, KEPCO said, adding that the state is also keen on improving its overall energy efficiency, updating old power grids and energy storage and has actively invested in smart grid technology.

KEPCO said this makes the state an ideal partner for cooperation in the development of the new energy sector.

“The MOU is an important starting point for future sustainable energy cooperation between South Korea and Maryland,” KEPCO CEO Cho Hwan-eik was quoted as saying after signing the pact.

The power company said the MOU is noteworthy because it opens the door for making inroads into the U.S. new energy market, which is estimated at 3 trillion won (US$2.66 billion) and accounts for 25 percent of the global total.

The latest agreement comes after KEPCO, which has been seeking to expand into overseas markets, inked a 13 billion won micro grid deal with Canada’s PowerStream Inc. in July.

The energy company said that besides the MOU signed with Maryland, it reached three other agreements to promote new energy fields with General Electric Co., Southern Company Services, Inc. and Beowulf Energy LLC.

The agreements, including the MOU with Maryland, were all reached on the sidelines of President Park Geun-hye’s visit to the United States.’