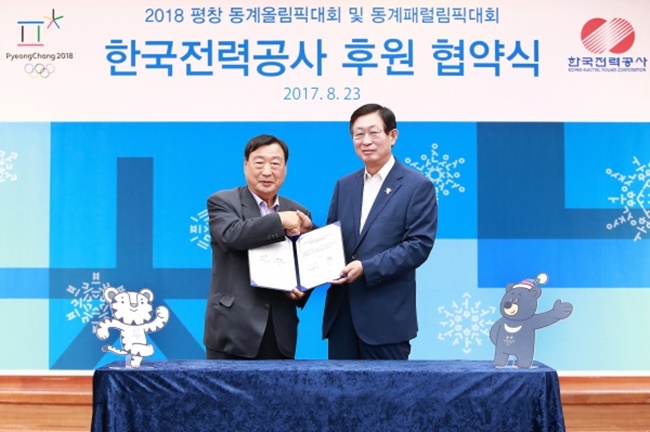 KEPCO is the first public corporation to lend support to PyeongChang 2018.

As a “Tier One” partner, KEPCO reserves a wide range of marketing rights, including the use of intellectual property and the use of PyeongChang’s logo in their advertising campaigns.

The organizing committee for PyeongChang declined to disclose the amount of the sponsorship contract, citing International Olympic Committee (IOC) regulations on Olympic sponsors. Prior to KEPCO’s signing, PyeongChang had reached 898.4 billion won in sponsorships, or 95.5 percent of its target of 940 billion won.

Last year, PyeongChang struggled to draw financial support from both private and public corporations. It ended 2016 about 10 percent shy of its sponsorships target. PyeongChang’s efforts were hampered by a major political scandal involving former President Park Geun-hye and her longtime friend, Choi Soon-sil.

Choi allegedly used her connection with Park to coerce major corporations into donating huge sums to her two foundations: Mir and K Sports. That had a trickle-down effect on PyeongChang, as those companies grew reluctant to open their wallets to sponsor the Winter Olympics.

Following Park’s impeachment and arrests of other principal figures in the scandal, PyeongChang turned the corner. Chief organizer Lee Hee-beom has been busy meeting with corporate leaders this year. President Moon Jae-in, also an honorary ambassador for PyeongChang 2018, called on public corporations to step up to help.

KEPCO President Cho Hwan-eik said he’s pleased to lend support to such an important international event, and pledged to ensure the smooth installation and operations of energy-related facilities during the Olympics.

PyeongChang noted that previous Olympic host cities, such as Vancouver, London and Sochi, all received support from their national energy corporations.