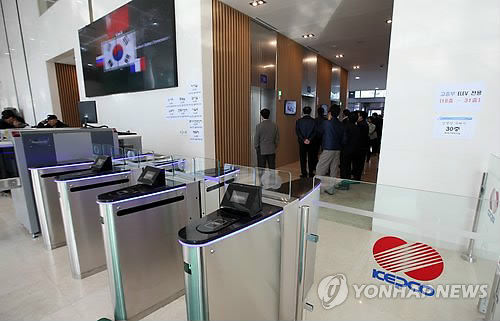 Net income reached 2.78 trillion won (US$2.55 billion) last year, compared with 174 billion won a year ago, the company said in a regulatory filing.

“Increased electricity sales and fuel cost savings as well as efforts to improve the financial structure pushed up the net profit,” the firm said. The figures include earnings from KEPCO and its subsidiaries.

The electricity provider’s net came to 477.13 billion won in the fourth quarter, down 23.7 percent from a year ago.

Sales increased 4.4 percent to 14.9 trillion won in the October-December period, and its operating profit soared 113.6 percent to 869.61 billion won, it said.

KEPCO forecast solid earnings this year on cheap fuel costs, expecting the impact of a recent drop in oil prices to be reflected in the liquefied natural gas used for factory operation starting this month.

The firm was also expected to gradually reduce its debt ratio after selling the land of its former Seoul main office for 10.55 trillion won to Hyundai Motor Co. in September. Its debt ratio was 198.6 percent as of end-2014, down 3.7 percent from the previous year.

KEPCO moved its headquarters to Naju, 350 kilometers south of Seoul, in December as part of the government’s plan to relocate state-run companies for balanced national development. It will receive payment for the land this year.

The positive outlook and lucrative land deal have raised hopes that KEPCO will pay bigger dividends in accordance with the government’s push to induce companies to return more money to shareholders.

“We plan to raise the dividend payout ratio this year compared to the previous year, and are discussing with the government to raise the level to over 25 percent,” Goh Won-geun, the vice president of KEPCO, said during a telephone conference.

Shares of KEPCO scored 2.23 percent to end at 43,500 won on the Seoul trading bourse, outperforming the benchmark KOSPI’s 0.51 percent rise, to become the nation’s fourth-largest company by market capitalization. The earnings announcement was made shortly before the market closing.