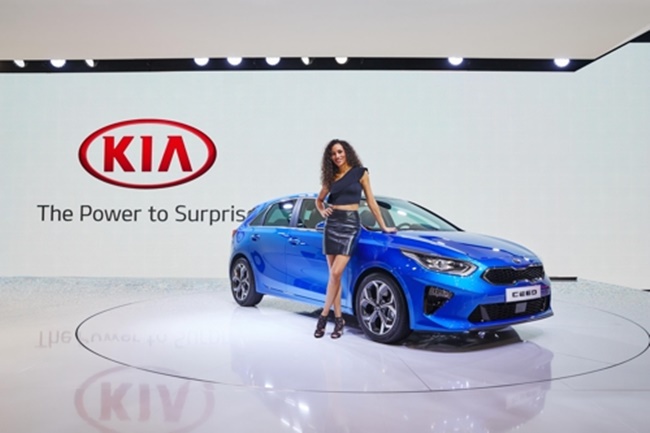 This photo provided by Kia Motors on March 6, 2018, shows the carmaker’s Ceed hatchback model to be unveiled at the Geneva motor show this month. (Image: Kia Motors)

In 2018, Kia Motors plans to launch the all-new Ceed hatchback and the Ceed sports wagon in the second quarter and the fourth quarter, respectively, to achieve the sales target, the company said in a statement.

The five-door Ceed will debut at the 88th Geneva International Motor Show in Switzerland that runs from March 8-18. It comes with a 1.0-liter, 1.4-liter or 1.6-liter gasoline engine, and a six-speed automatic transmission, the statement said.

Other models to be introduced in the show include the upgraded version of the midsized Optima sports wagon and the supermini Rio GT-Line, it said.

“All of these model ranges — Ceed, Optima and Rio — are key contributors to the brand’s sustained growth. Combined, they account for more than a third of Kia’s European sales, and these latest models will provide the impetus for our next phase of growth, as we target more than half a million sales in Europe in 2018,” Michael Cole, chief operating officer at KiaMotors Europe, said in the statement.

The Ceed, formerly called the cee’d, has been a top-selling model for Kiain Europe. More than 1.28 million Ceeds had been sold in Europe as of January this year since its production began at Kia’s Slovakia plant in2006, it said.