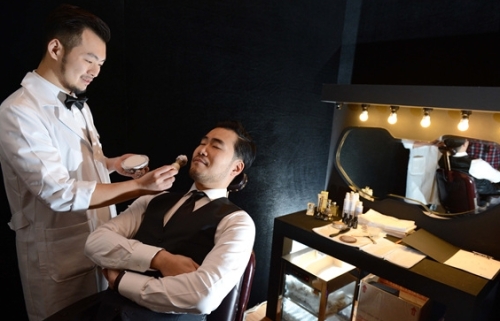 By hosting such extravagant hands-on events, KIA Motors aims to put the K9 right next to the image “luxury” in customers’ minds. (image: Kia Motors)

SEOUL, Korea, April 25, 2014 (Korea Bizwire) – KIA Motors seeks to achieve a buzz effect on its newly-released sedan, K9, by concentrating on the “experiential marketing.” The motor group has recently held “K9 Driving Experience Dining” event, which is the second since the launch of the luxury sedan this year. The participants of the event enjoyed the nine-dish course meal, which had emblems of KIA Motors and K9 in every plates and food that have been served.

Prior to this, KIA motors hosted the “Salon de nine” event in January. The event provided opulent services for successful men in their 40s and 50s, who are main customers of the vehicle, in specially themes rooms.

“Welcome room” was set up with a bar and blackjack tables, “Grooming room” provided styling advices by experts on clothing, hair and so on, and in “Tailor room,” participants were able to try on suits and even received mind-control therapy sessions. Another room was decorated in ways to promote the strong-suits of K9 as well as with photo zones.

KIA’s zealous efforts in luxurious experience marketing does not come from nowhere: It is because it is well aware buzz marketing can be the most effective tool for high-class sedans.

A marketing director at KIA Motors said, “Second-hand experience or word-of-mouth effect often exerts a powerful influence on the decision-making process for deluxe auto models. After researches and series of studies, we have concluded that focusing on experiential marketing would be most effective with the K9 since the model is fairly new to the customers and had little or no buzz effect.”

By hosting such extravagant hands-on events, KIA Motors aims to put the K9 right next to the image “luxury” in customers’ minds. The events, as they claimed to advocate extravagance, cost substantially, but the company looks to invest more in the marketing in hopes of long-term effects. The car company has spent 700 million won already on the “Salon de nine” event, and plans to invest 3 billion won more on the K9′s experience marketing.

The director added, “In general, car dealer shops and agencies only offer 30 minutes to try out a car, but we give a three-day trial period for customers and also have built a test drive center. It is hard to find a customer who gives up on buying the car, after the three days.”

The company also plans to host a test drive event on a circuit, to promote the K9′s performance in extreme situations and its quality of being fun to drive.