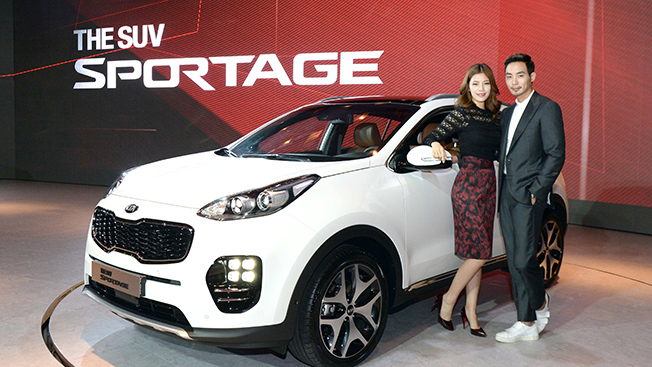 The latest edition of the Sportage equipped with a revamped design and an array of safety features is the fourth generation of the popular SUV model which debuted in 1993. (image: Kia Motors)

SEOUL, Sept. 15 (Korea Bizwire) — Kia Motors, South Korea’s second-largest carmaker, said Tuesday that it is targeting to sell more than 60,000 units of its revamped Sportage SUV in the country next year.

The latest edition of the Sportage equipped with a revamped design and an array of safety features is the fourth generation of the popular SUV model which debuted in 1993. Kia Motors has invested around 390 billion won (US$329.8 million) in the new model over the past two years.

“This is the model of the highest expectations for this year that we have put all our capacity into,” Kia Motors CEO Park Han-woo told reporters. “We approached its development with upgraded and differentiated standards in all aspects including design, product value and quality.”

Kia Motors aims to sell 30,000 units of the new Sportage during the remainder of this year with the plan to raise annual domestic sales to over 60,000 units from next year. Since early this month, it has received around 5,000 preorders for the new model, the company said.

The all-new Sportage has two engine options. The R 2.0-liter diesel engine, which meets the latest Euro 6 emissions standards, is equipped with a high-efficiency turbo charger that allows for a strong performance and claims a fuel efficiency of up to 14.4 kmpl.

The downsized UII 1.7-liter diesel power train offers a dynamic experience through its seven-speed dual clutch transmission. The Sportage equipped with this powertrain will be launched next month.

Safety on the new Sportage has been upgraded, with an advanced air bag system, which can adjust the air pressure depending on the speed during impact, and a high-beam assist program that makes nighttime driving more convenient for drivers as it automatically adjusts the headlamps’ range when necessary.

The new Sportage comes in four different trims based on engine capacity and options. Its price ranges from 23.46 million won to 28.42 million won.