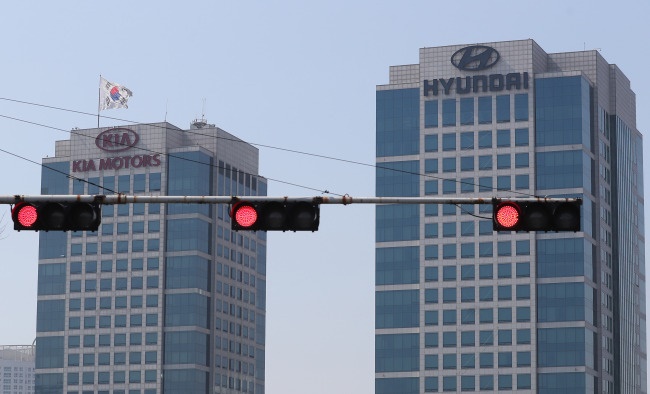 The walkout planned for Tuesday comes as Kia’s management and its 28,240-strong union failed to narrow a gap over wages and other benefits in this year’s collective bargaining negotiations. (Image: Yonhap)

The walkout planned for Tuesday comes as Kia’s management and its 28,240-strong union failed to narrow a gap over wages and other benefits in this year’s collective bargaining negotiations.

“After weeks of talks with the management, Kia workers have decided to carry out the strike in line with planned strikes by (its umbrella labor group) the Korean Metal Workers’ Union,” a company spokesman said by phone.

On Wednesday, the company’s union leaders will decide on whether to hold a walkout separately from the strikes arranged by the metal workers’ union, he said.

The labor union demands the company raise workers’ monthly basic wages by 154,883 won (US$136) and offer a bonus of 30 percent of the company’s full-year operating profit earned in 2016.

They also want their bonuses which are regularly paid to be counted as wages as well. But the company has balked at the request, citing deteriorating business conditions.

The carmaker has called the demands “excessive,” citing its lackluster performance in global markets in 2016 and in the first half of this year.

In the January-June period, Kia sold a combined 1.32 million autos, down a sharp 9.4 percent from 1.46 million units sold in the year-ago period due mainly to declining sales in China and the U.S.