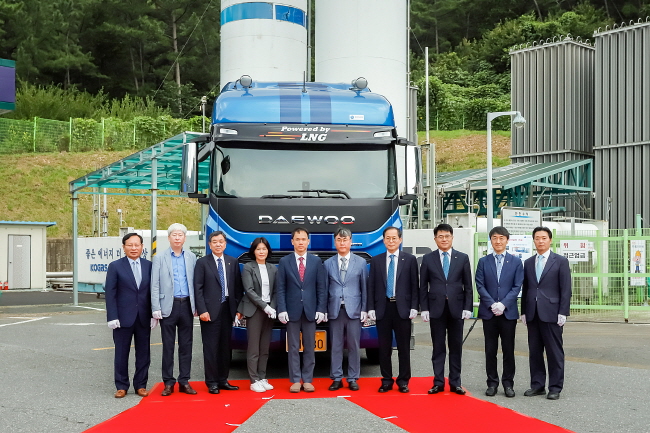 The 400 horsepower-truck will be built on a Tata Daewoo frame and powered by an engine made by Fiat Powertrain Technologies of Italy. The truck will have a driving range of 800-1,000 kilometers on a full tank, and its fuel economy is rated at 2.9 km per liter of LNG, KOGAS said.

KOGAS and Tata Daewoo, the nation’s second-largest truck manufacturer, will test the vehicle at the gas firm’s operation in Tongyeong on the southeastern coast and at a gas charging station in the central city of Daejeon.

The gas firm said it will step up efforts to promote LNG trucks as a more eco-friendly and economically viable alternative to diesel vehicles.

If half the 120,000 diesel vehicles over 8 tons are replaced with LNG trucks, it would reduce fine dust emissions by 1,474 tons in Seoul, it added.

KOGAS vowed to expand natural gas charging stations in major ports, cargo terminals and highway gas stations and to consult with the government to expand subsidies and incentives for LNG commercial vehicles.

Meanwhile, KOGAS said it jointly held a groundbreaking ceremony with Samsung Heavy Industries Co. to begin construction of a facility for a floating liquefied natural gas (FLNG) project in Mozambique.

The project involves building a floating offshore platform with the capacity to produce 3.3 million tons of LNG annually from the Coral South gas field in the African nation.

KOGAS, which owns a 10 percent stake in the project, is in charge of developing and producing natural gas from the Coral field, and Samsung Heavy Industries Co. will build and install the FLNG facility.

Partners in the field development include the China National Petroleum Co., Italian energy company Enia and the National Oil Company of Mozambique.