SEOUL, Sept. 19 (Korea Bizwire) – It is quite enough to say a national fever. A new football star who has been brought into sudden prominence among Korean football fans, scored five goals in all the four games in the ongoing Asian Football Confederation U-16 Championship. He is Lee Seung-woo and is called “Korean Messi.”

It is all the more encouraging that, he is currently playing for the Barcelona youth club just like the world star Lionel Messi did when he was young. Lee scored two goals in the quarterfinal match against Japan on September 14 and especially the second one was the class of Messi. He dribbled 55 meters just behind the half line right past the Japan defense to score. That goal looked just like the ones Messi had usually played in many games.

In the semifinal on September 17 in which Team Korea defeated Syria with a 7–to-1 score, he made one goal and assisted four other goals. It seems that few players at his age in the nation dare to challenge him for now.

The starlet of Barcelona youth club became an instant social media phenomenon, in the nation, netting 40,000 fans on Facebook in just two weeks. Moreover, he was one of the five top trending topics on Naver, South Korea’s most popular search engine, on the football match days.

With his splendid plays in the championship, Spanish daily Marca reported his performances on September 17 with the title “Seung-Woo Lee fever breaks out in South Korea.” Marca wrote that Lee “has scored on each of his appearances at the competition and was compared to Lionel Messi and Diego Maradona for his sensational strike against Japan, in which he dribbled almost the full length of the field.”

Thanks to the impressive plays of Lee, the South Korean team advanced into the final for the first time in eight years and will compete with the North Korean team on September 20. However, just like Messi failed to win the last World Cup Championship, now one star cannot hold sway over the destinies of a team. 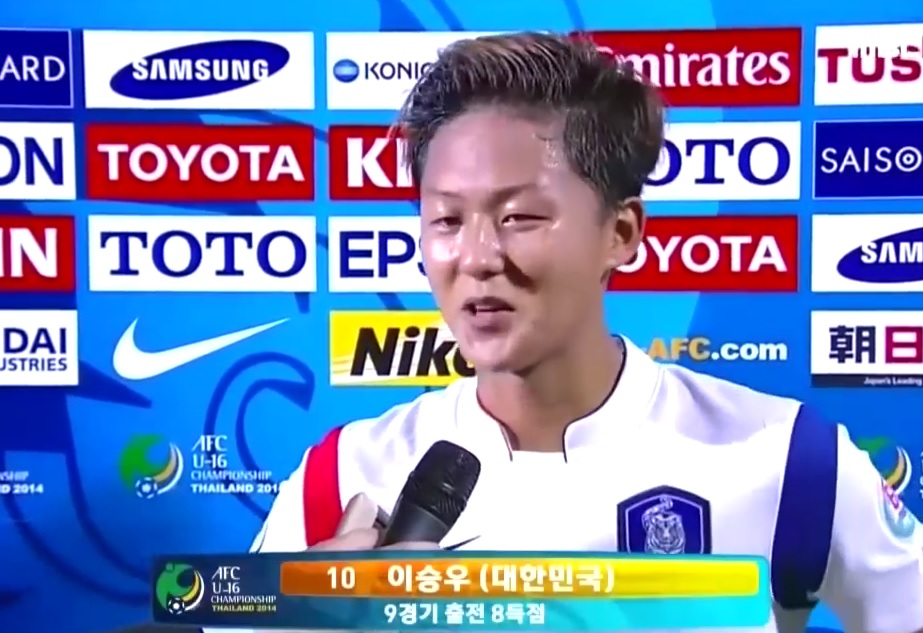 Thanks to the impressive plays of Lee, the South Korean team advanced into the final for the first time in eight years and will compete with the North Korean team on September 20. (image: Youtube)

Although it is worth noticing Lee’s talents, the U-16 squad this year is believed to be the strongest ever in Korean football history. Most of all, all the players are showing excellent talents. Including Lee’s Barcelona teammate Jang Gyeol-hee, this squad consisted of excellent players born in 1998 and 1999.

The players in the age group are main beneficiaries of the physical, human and cultural football infrastructure built up right after the 2002 World Cup held in Korea. Just before and after the World Cup Games, Korea installed many lawn play-grounds across the nation and youth football teams based on K-League.

Many football players including former Manchester United star Park Ji-sung went to Europe’s big clubs and the Korean Football Association brought foreign coaches into Korea to learn advanced football technique in Europe. The U-16 team can be said to be the result of the collective effort in a nearly nation-wide level.

As such young football hopefuls including Lee and Jang can experience the European football firsthand, they would not shrink when competing against European players and could play creatively on the world level matches. That is why many Korean football fans are beginning to pin their hope on the next World cup games.