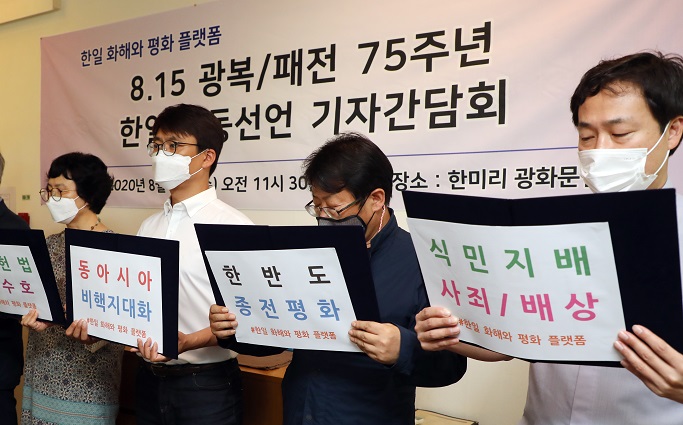 Members of the Korea-Japan Reconciliation and Peace Platform announce a joint statement in a news conference in Seoul on Aug. 12, 2020. (Yonhap)

SEOUL, Aug. 12 (Korea Bizwire) — An alliance of South Korean and Japanese civic and religious groups called on both countries Wednesday to resolve bilateral history issues ahead of the 75th anniversary of Korea’s liberation from Japanese colonial rule.

They urged Tokyo to implement the South Korean Supreme Court’s compensation ruling for wartime Korean forced laborers, offer an apology and compensation to Korean victims of Japan’s wartime sexual slavery and admit state responsibility for the massacre of Koreans after a 1923 earthquake in Tokyo.

“Japan’s government and parliament should install a truth-finding commission in charge of investigating the 1923 massacre of Koreans after the Great Kanto Earthquake, and wartime sexual slavery and forced labor,” the alliance called the “Korea-Japan Reconciliation and Peace Platform” said in a statement released at a news conference in Seoul.

Reportedly, thousands of Koreans were killed in Japan right after the 1923 earthquake because the Japanese government spread a rumor that Koreans planned a riot, agitating the Japanese people.

The alliance demanded that Japan reveal the truth of the comfort women, the victims forced into sexual slavery during World War Ⅱ, and provide indemnity to them with a sincere apology.

South Korea’s Supreme Court ruled in 2018 that Japanese companies responsible for forced labor by Koreans during Japan’s colonial rule from 1910-45 must compensate the victims.

The statement also said that the countries should work together to preserve Japan’s postwar pacifist constitution while searching for ways to realize denuclearization and peace in the Asia-Pacific region.

“It has been 75 years since the end of Japan’s colonial rule but we are still in the midst of the unfinished history between the two countries,” said Yoon Jeong-suk, a Korean member of the alliance, adding that the citizens have to step up efforts to achieve concrete reconciliation and peace between South Korea and Japan.

The alliance, consisting of 16 South Korean organizations, including the Korean Council for Justice and Remembrance and the National Council of Churches in Korea, and 16 Japanese entities, including the National Christian Council in Japan and Peace Boat, launched last month to increase understanding of the two countries’ shared history and heal victims’ wounds.

It also campaigns to support the Korean peace process and maintain the war-renouncing Article 9 of the Constitution of Japan, as well as pursue the denuclearization of East Asia and a common vision of peace for the Asia-Pacific region.

Another priority is the education of youth in both countries on peace and human rights, it says.