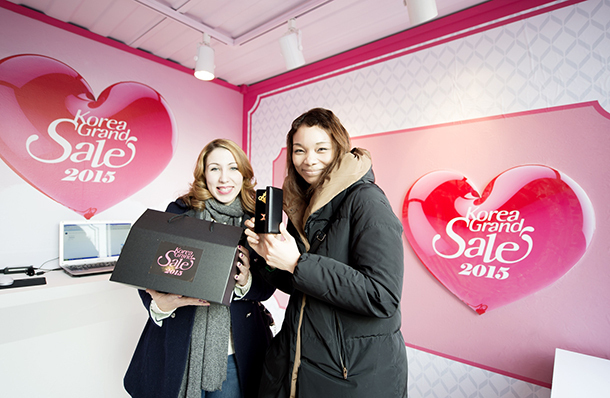 SEOUL, Aug. 11 (Korea Bizwire) – To revitalize Korea’s tourism industry and domestic demand dented by the recent outbreak of the Middle Eastern Respiratory Syndrome, the “Korea Grand Sale” will run for 79 days from August 14 to October 31.

The Visit Korea Committee announced on August 11 that this year’s Korea Grand Sale would be the largest shopping and tourism festival ever held in this country, with some 250 companies and 30,000 shops partaking in the event. The participants include airlines, hotels, department stores, duty-free shops, large supermarkets, shopping malls, entertainment agencies, and small sized shop owners.

Everland will offer a 50 percent discount on a one-day ticket, while Olive Young and Innisfree will also provide up to 50 percent discount for their items. In the case of SK Telecom, it will waive the rental fee for LTE WiFi modems for foreign visitors.

At Doota Square in Dongdaemun, the Korea Grand Sale event center will be equipped to provide translation, tourism information and drinks.

In addition, in early October, when a large number of Chinese tourists are expected to visit Korea commemorating the National Day of China, the organizing committee will run “special themed weeks” enabling foreign visitors to experience different aspects of Korean culture.

The opening welcome event, the official beginning of the event, will be held simultaneously at all major airports, including Incheon and Gimpo International Airport, on the opening day, with magic shows to be performed by famous magicians including Choi Hyun-woo.

Han Kyung-ah, the secretary general of the Visit Korea Committee, said, “The Korea Grand Sale will be a great opportunity and a challenge to escape from the crisis and create a new hopeful atmosphere for the tourism industry. We will try our best to help foreigners who visit Korea during the event to enjoy not only shopping but also tourism and cultural experiences.”