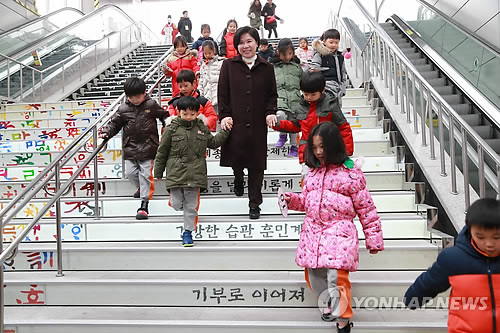 Korea Yakult will be sponsoring the total donation sum collected at the staircase, and will donate the accumulated funds to needy citizens in poor health. (image courtesy of Yonahap)

SEOUL, Jan. 30 (Korea Bizwire) — Korea Yakult Corp. is opening its second ‘Donation by Walking Up’ staircase at exit no. 1 of Seoul Express Bus Terminal Station, said the company on January 29. The staircase features an automatic donation system, which contributes 10 won (US¢ 1) for every person walking up the staircase.

Korea Yakult will be sponsoring the total donation sum collected at the staircase, and will donate the accumulated funds to needy citizens in poor health. Korea Yakult built the first donation staircase at the Seoul Citizens Hall last year, in collaboration with the Seoul Metropolitan Government.

The second donation staircase was also created as a piece of public art, colored in splendid shades with old Hangeul characters. Citizens can also play sounds from the Korean twelve stringed zither gayageum by stepping onto certain stairs.

Choi Dong-il, marketing director of Korea Yakult, said on January 29 that the donation staircase is a place where citizens can work out and donate some money at the same time. He said that the company will expand its CSR campaigns to let healthy habits spread among Korean citizens in all corners of the country.

The donation staircase will generate contributions of up to 20 million won (US$ 18,000) a year. Metro 9, the operator of Seoul line no. 9, is sponsoring the electricity costs of running the staircase. 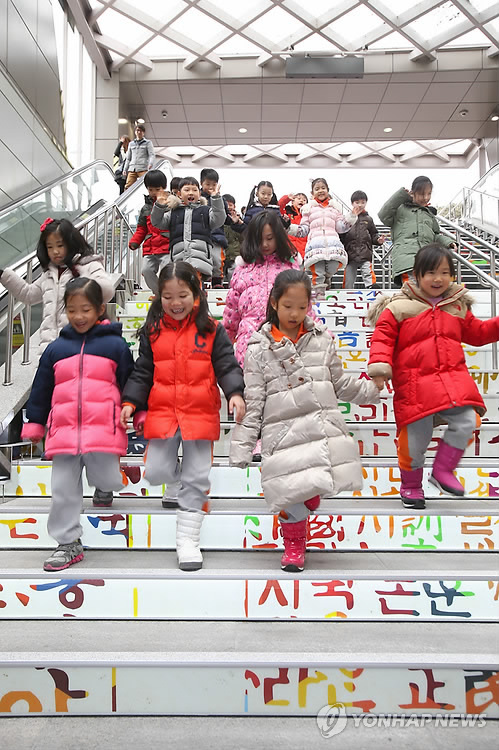